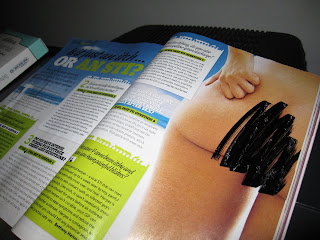 I bought this crappy women's magazine a couple of weeks ago for a flight - for some reason, crappy women's magazines are about all I can focus on while in the air, that and completely dumb movies - and was killing myself when I noticed what one of Abu Dhabi's censors had blacked out. I'd heard about these black markings ever since arriving, just never saw it for myself. Then, there it was, in British Cosmopolitan, part of an article called... well, you can see what it's called.

The thing is, shouldn't pretty much all of British Cosmo, and Glamour, and just about every other women's magazine that fall all over themselves to write about things of an, ahem, extremely personal nature, be subject to the black marker too? I am not, repeat not, asking for this to happen. I simply wouldn't mind if things made a bit more sense sometimes.
at January 05, 2009

For your sake I'm glad there were the black marks. What would it have been like to turn the page and have that picture so close to your face. Yuck!

I've seen similiar censorship back here in Canada in the form of mustaches on faces.
The world we live in eh?

Walk past lingerie shops in any mall or in town & the windows are full of displays of sexy undies, but gawd forbid you should see a bum in a magazine!

In high school the Oxford dictionaries we used had the diagram detailing the male and female genitals were blacked out. I think it was under "Reproduction" page 842... don't ask me how I remember that :P

Sometimes I feel that I would like to see the place where they censor the magazines. That office must use up a LOT of black markers and bandages for papercuts.

That is a great feature idea...