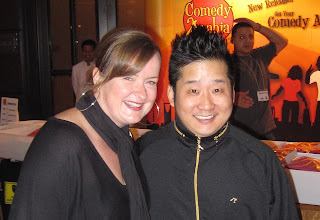 I am not quite sure when I became the sort of person who accosts celebrities and demands a picture with them. I did not used to be like this: I have interviewed all sorts of famous people and managed to maintain my composure and avoid breathlessness.
But I wasn't working last night. And as we lined up for drinks at the bar before the Comedy Arabia show at the Beach Rotana, I looked over the merchandise table and saw the MADtv comic  standing there, all alone.
Him: "You know who I am?"
Me: "Of course. Doesn't anyone know who you are?" (I like to say redundant things when speaking to people I admire, apparently)
Him: "No! That's why I'm going on first."
He wasn't very funny, in the end, although I won't blame Bobby Lee. It was a tough crowd, and no one knows how hilarious he is on MADtv, and I think he had to tone things down quite a bit. I just give him credit for coming; it would have been heaps easier to do some shows in LA, I imagine.
It was a good night, all round, acoustic issues aside. The other comedians were better, mostly because their acts seemed more tailored to a diverse, Middle East crowd. And although we were laughing at them, a lot of the times we just laughed because we had no idea why the crowd - full of nationalities from around the region and outside of it - was laughing.
Like when one said "My name is Erik Griffin. And no, I am not Egyptian," everyone just killed themselvesg. We just looked at each other. Is it because his name doesn't sound Egyptian, I wonder? One of them mentioned the word "week" and people all but stood and cheered. Three Emiratis in the front row took a ton of ribbing, being called Sheikhs and teased for being rich, and they laughed along too.
at January 28, 2009

I wish I had a social life then i would have gone also.