I interviewed the Saudi director Haifaa Al Mansouri at the Dubai International Film Festival over the weekend, before news hit that Saudi would definitely have movie theaters starting next year. Still,  when I asked her how she would feel about the possibility of seeing a film in her home country after a lifetime of not being able to, she said the cutest thing:

“See a movie? I’ll have a film playing!”

Courage + 'when are you coming home'? 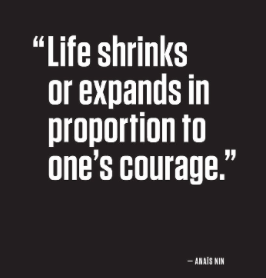 I love this Anais Nin quote. This quote always makes me think about my life in two parts: before my mom Christine died of cancer when I was 27 and she was 53, and after.

Not only did it lurch me into adulthood in the three short months she was ill - like so many women, I wasn’t so much an adult who made my own decisions as a person who leaned on my mother in every way - but it brought something else into sharp focus. What if I died? What if I only made it to 53?
What if my mom knew she was going to die then? What would she have done differently? I know one of the paths she didn’t take, using her nursing degree to become a flight attendant, was something she thought often about. I know she was great at living in the moment and getting immense enjoyment from silly things, and lifelong learning and growing, and challenging herself, and that she loved being a mom. What else, I won’t know. But life from that moment changed forever for me, and ordinary became impossible.