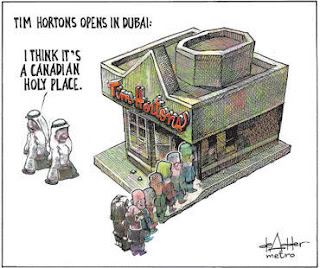 Thanks to Dubaiwalla for pointing out Michael De Adder's cute editorial cartoon (I miss those! You don't get them easily online) in Toronto's Metro.
at September 23, 2011 2 comments:

Tim Hortons in Dubai: The National is there


Check out Tahira Yaqoob's spot-on report from the scene of the first Tim Hortons in the Middle East. I love this part:


The entrance is marked by a cheery red sign in English and Arabic reading "Tim Hortons cafe bake shop", Matthew Clarke opens the door with a flourish right on queue, dressed in a hockey shirt and shorts, and announces: "Come on in, the coffee's fresh."


The 50-year-old Emirates pilot from Canada is not even on the payroll; as a customer on his first visit, he is simply over-excited about having a little taste of home in the land where he now lives.

Overheard in the newsroom: Tim Hortons in Dubai edition

My goodness, they do look like the real things.

Why isn't there an apostrophe in it?

Annie, I am going to be nicer about Canadians. That doughnut was delicious.
at September 19, 2011 No comments:

Tim Hortons in Abu Dhabi shipped in from Dubai: IN MY OFFICE, RIGHT NOW 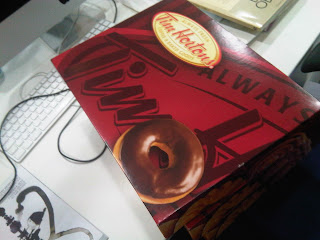 An awesome American colleague brought us three boxes from the new Tim Hortons in Dubai. Like a long-distance delivery of pure love. I just ate a chocolate glazed. I am not going to lie - the sight of that logo choked me up a little. PS she said it was "packed"
at September 19, 2011 No comments:

"If you want to do a lingerie expose, it's fine with me."

Writer: "What do you think about trousers with boots?"
Editor: "Ohhh. Not much."

Editor A: "The fashion writer is in the ER and he can't file."
Editor B: "Did he discover he was wearing brown shoes and blue trousers?"
at September 18, 2011 No comments:

Tim Hortons in Dubai: An account by a Canadian who has seen it with his own eyes

James O'Hearn is a totally awesome individual. Not only has he already been to the new Tim Hortons in Dubai (which is, as he describes it, before the first interchange, "right next to a Starbucks, between an Applebees and the French Connection") when it opened yesterday morning he was their very first customer!

In what surely could and will be one of those tearjerker Tim Hortons Christmas commercials, he set his alarm and walked in the doors at 6.55am yesterday to cheers from the staff.

Highlights:
*coffee is Dh7!
*the food tastes the same!
*no everything bagels! (I laughed because so far the only comment on the blog is "are you serious about the no-everything bagel part?" As O'Hearn explains, UAE officials no-likey the poppyseeds)
*American sizing
*no drive-through

I loved this part:


I'm happy Timmies is here, because now I can get a nice soup, bagel, and coffee for lunch. I can grab a pack of Timbits for my kids, or a French Vanilla for my wife, just like how we used to have it back home.


But as much as I am happy, I also wonder... will this be yet one more thing that makes me so comfortable, so complacent, that I end up not going back at all?


And then, an update: I came back, a day later. The place was absolutely overflowing. They literally could not keep stock on the shelves, and one of the managers I had met from the day before was sitting outside, around the corner from the front door, looking like he was ready to just collapse on the pavement. He recognized me, and as we shook hands, he said "Since you came, it hasn't stopped."


I hope to get there this week to file my own report, but for now, he can tell you all about it. With pictures! Over to you, James.
at September 18, 2011 2 comments:

So while I have been focusing my efforts on tracking down the pending opening of (what I assumed to be a Gulf first) Tim Hortons at Abu Dhabi's Mushrif Mall, it seems a franchise has quietly launched in Dubai on Sheikh Zayed Road! An anonymous commenter said as much this week but I thought "why do they know?" (Anonymous commenters on fun blogs don't hold much water with me)

I was just about ready to update you all, letting you know that I have made contact with the PR firm handling the TH opening at Mushrif, filling you in on their hope that it will happen before the year is through when someone sent me a screen grab of a Facebook conversation confirming that Dubai ALREADY HAS a Tim Hortons.

STATUS UPDATE: "WHAAT! Tim Hortons' (sic) opened already?!!! I protest that I have not been told."

Comment: "Sis went with Naoman yesterday. They still not 100% with handling crowds vs serving it right! So, I guess it makes sense to hold off or go during odd hours of the day!"

Comment: "Damn damn damn.... am gonna try a 9am trip tom.. hopefully everyone will be at work by then"

Sigh. A whole bunch of other comments followed, including directions – Sheikh Zayed Road, next to Number One Suites, before Interchange One, heading to AD. So there you have it!

I am grounded in Abu Dhabi for several days, so any reports/reviews/updates etc are welcome.

When Tim Hortons does open in Abu Dhabi I would very much like to write about it; informing other nationalities of the tremendous significance of the outlet being just one aim of such a piece. And so it was last week that, not wanting to wade my way through what I felt could be an arduous and potentially fruitless phone call, if my time in the business of finding things out in Abu Dhabi over the past three years is any indication, I sent the management an email instead. And from the response, I am starting to appreciate what might be holding things up.

An open letter to Pizza Hut: It's about your latest crust 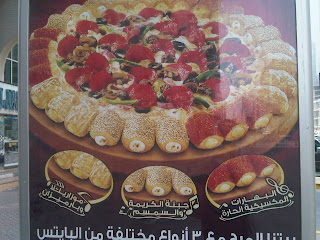 Although I can sort of read Arabic symbols after having successfully attended about 2/3 of a beginner Arabic class six months ago, I have yet to figure out how to determine what they mean. Perhaps if I could read the sign, it would say "of course we would never do something like this to pizza, that would be preposterous - so pick up the phone and order a normal pie today!"

Forgive me if that is the message. Because with these ads that have popped up around Abu Dhabi in recent weeks, I believe you have finally gone too far in your efforts at "brainstorming" for "new creations" to entice new customers. What I see on this billboard simply makes no sense. It's not pizza. It's the beginnings of a pizza, surrounded by some sort of baking: a casserole? Non-pork sausage roles? Dinner doughnuts? I remain perplexed.

Abu Dhabi censors are nothing if not thorough

I thought the latest issue of Women's Health had passed muster, and I was about to close it up when I noticed it had not escaped the black marker after all: 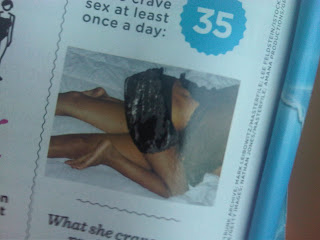 Email ThisBlogThis!Share to TwitterShare to FacebookShare to Pinterest
Labels: censorship

Snap caption: You can't just talk the talk on The Walk

News is different in the Middle East: Man finds his maid in bed with her lover 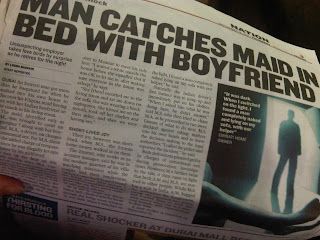 I am in Dubai for the weekend and took the opportunity yesterday to browse through some of the papers I don't normally get to see in actual print, including Xpress.

This story made me giggle a bit. It looks so serious, doesn't it? The man in the doorway, the light, the massive, all-caps headline. Only when you think about it for a minute do you realise that something that back in Canada would involve one very humiliating episode, for all involved, and some fallout embarrassment that might linger for a week here involves a court case, jail time and warrants page lead story. It's very easy to forget just how scandalous something like this is here. The papers are full of court cases of maids and household staff being caught in the action, their employers having reported them to the authorities. I can say "what's the big deal" all I want, but the law is the law.

Tim Hortons in Abu Dhabi: Moe the commenter investigates, does not like what he finds

I was just at the Tim Hortons in Mushrif Mall; its still under construction. the door was slightly open so i looked inside; there is absolutely nothing there. Bare ceilings and walls. no counters, no chairs, no kitchen, not even paint to cover the wall bricks. This is gonna take at least 2 months to complete.

Overheard in the newsroom: A British writer to a Canadian editor

September in Abu Dhabi is like March in Ottawa or, if you are feeling out of sorts and crappy, it's not all in your head

I once worked closely with a brilliant woman named Deb, back at the Ottawa Sun, and she used to call March something quite apt and catchy. I can't quite remember what it was, of course, but it ended with "broken dreams". Her point was, March in Ottawa sucks. You get fooled into thinking that just because it's March, it's spring. Or at least the end of winter. But it's not. March has snowstorms, freezing rain, lots of dirty crappy snow and grey greyness - no sun and it's still COLD. It's basically a winter month that has the "air" of a spring month, and that is why it is wrapped in trickery. March was the month that no matter how many times I would promise myself "no all-inclusive Mexico week this year you are saving for something more important", I would find myself breaking that promise, booking a trip in a mad panic and boarding a flight for anywhere warm and sunny - often paid for with credit I could not afford. March was the month I lost my temper at work; the month I got worked up about all the small stuff that doesn't matter; the month where if I was single I was sure I would be alone forever; the month I hated my job and my apartment and a lot about my life. Relations were often strained with everyone, including my fairly amiable late cat, Jerry, who also was not impressed.

Overheard in the hair salon

It's so easy to please your customers here. They are just happy to have their hair cut straight.
at September 04, 2011 No comments:

Email ThisBlogThis!Share to TwitterShare to FacebookShare to Pinterest
Labels: Overheard in the hair salon

This is not an episode of Sex and the City. This is a newspaper.

Any diet that has a mashed potato day is not worth the time.

Do you reckon you could print it smaller?