You have the wrong number. What does it matter who you are speaking to?
at April 24, 2012 No comments: 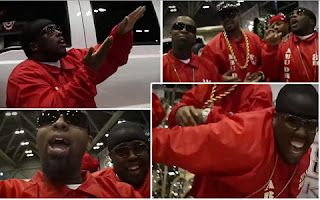 I don't know anything about this US rapper, but I do wonder why and how he and the 816 Boyz are rapping about Abu Dhabi, in a song called Abu Dhabi, in jackets that say Abu Dhabi on them, at what appears to be a car show.

So very many questions. Kaliko's album Kickin' & Screamin' drops May 15, yo. The video's had more than 100,000 hits on YouTube since it went up a week ago Friday. Give it a listen. It's very rap-esque, with profanity and content of a sexual nature (not to mention an absurd use of the word "Dublin"). I am not really a fan of this genre, but damn, it's catchy!

Overheard in the newsroom: Friday edition

Email ThisBlogThis!Share to TwitterShare to FacebookShare to Pinterest
Labels: Overhead in the newsroom 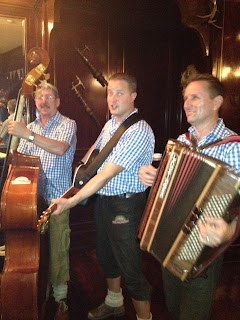 Lost in Translation: A simple tip for getting your name across to others of another language

The UAE is nothing if not multicultural. I love that about Abu Dhabi. But sometimes it gets to you, all the struggling to make yourself understood. See this coffee cup? They just started doing this at my local Starbucks (I normally have a reusable to-go cup for all those eco-trolls out there) and you have no idea what went into getting this name right. 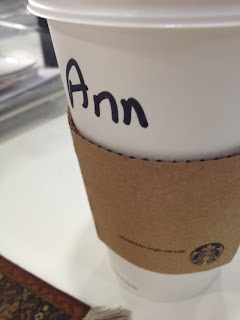 I've written about this before. While I might think it's the easiest name in the world to get right, in these parts "Ann" does not translate well at all. At all. This has led to a lot of frustration on my part over the last four years, a lot of wasted moments and irritation and ill-will that I wish I could take back. As I related my latest "tale of woe" (and I realise this is a small, small issue in the grand scheme of things) to a friend, she had the most beautiful and simple solution of all. "Just don't try," she said. "Whatever they say, say yes. It doesn't matter what they write."

Email ThisBlogThis!Share to TwitterShare to FacebookShare to Pinterest
Labels: Lost in translation

My colleague @Fliss_c brilliantly summed up some of the worst habits and obstacles one can encounter when flying in and out of the UAE. In 140 characters or less. Feel free to chime in with your own in comments. My favourite is #2.


#1 MOVE ALONG! Why do they walk so slow, and randomly stop? Let's get some london tube rules in and stand to the right?

#2 he's been in the metal detector queue for 15 mins why the HELL is his watch, belt on and phone STILL in his pocket?

#4 being skint and therefore having to transit at bahrain or qatar. Bahrain you're not too bad but qatar!!! Your airport su-uuu-cks.

#5 using the bathroom. It's always gross in there somehow. Always. Lingering wee smell.

2010 brought us the Burger King pizza burger and now, courtesy of those innovative folks over at Pizza Hut, we have the Cheese Burger Pizza. When you just can't decide what to have for lunch and don't want to have to choose. With cheese! 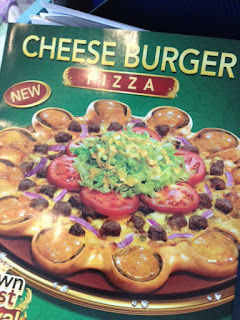 For the record, I think this would be vastly improved if the little cheese burgers had tops on them.
at April 08, 2012 2 comments:

Imagine abandoning your car? 3,040 people in Dubai have done more than that since the start of the year

Dubai Municipality just released its 1Q abandoned car report, which has become a sort of yardstick for economic recovery, although I am not sure it really is, and the numbers are up: From January to March, 3,040 cars were abandoned across the emirate, compared with 2,738 in the same period last year.

An interesting debate over at @UAELGBTR

The local United Arab Emirates Lesbian, Gay, Bisexual and Transsexual Rights group have been having a very interesting debate with Jalal BinThaneya (@Binthaneya), a prominent Emirati activist for the mentally and physically disabled, on Twitter today.

Interesting until accusations of spreading HIV everywhere and the like broke out, I mean. The debate has been about, well, being gay and Muslim in the UAE, and you can imagine which side of the discussion BinThaneya falls down on. UAELGBTR, who have added a rainbow to the UAE coat of arms to create their logo, are a courageous bunch if there ever was, even while anonymous.

Overhead in the newsroom

Does this newsroom have a guillotine?

Is that Jane Fonda?

Did you run out of hair product?