It does not take two months; more like two hours, for a camel to cure depression 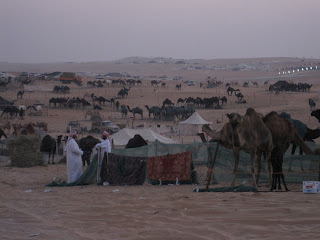 Okay, maybe "cure" is a strong word. But ease? Definitely. I giggled this week when a camel farmer from Oman told one of The National's reporters that a French psychologist had found that spending 60 days with a camel can cure depression. Not being able to locate the study in question, we are just left with so many more questions than answers. Why a psychologist from France, where there are no camels? How did he come to study this - by accident? And was it that after 60 days he, or his subjects, ended up just so happy to be back among people he/they could talk to that any signs of melancholy magically lifted? It is one of my New Year's Resolutions to track down this study; any hints or leads would be greatly appreciated. 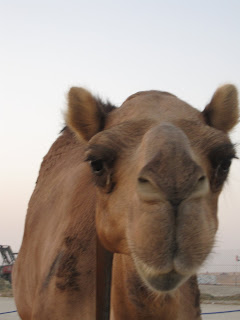 So the Al Dhafra Camel Festival wraps up today; a friend and I headed down there on the weekend to see what was what. We concluded that for us, driving two hours to the camel festival was not really worth it, but we were conflicted. Because you can't really know that the camel festival is not going to be worth it without first seeing the camel festival for yourself. And since we laughed ourselves silly at all the camels (see headline) and ate some yummy, tasty local treats we bought at the souq - some sort of salty and spicy rice/pasta mixture and the most incredible zaatars that we pretended had not been thrown on the floor, even though we could clearly see that they had been as we waited for them - maybe it really was worth it in the end. We've also concluded that when we feel this way about things we do in the UAE, we will simply say "it's like the camel festival" and then will know exactly what the other is talking about. 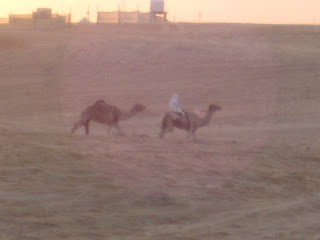 We missed the turnoff, initially, and with the Western Region's distinct lack of overpasses, spent a half-hour looking for a place to turn around, then another half-hour coming back (or so it felt) we were too late for the Mazayina, or beauty contests everyone has been talking about. But we did get to check out Million Street, seen below, where people basically just walk or, hysterically, drive their camels, like a dog on a leash, but not really, in a sort of car-heavy parade aimed at attracting the highest bidder. 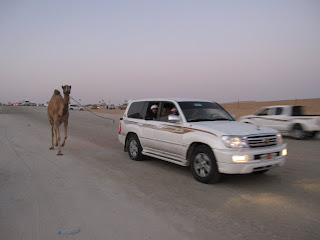 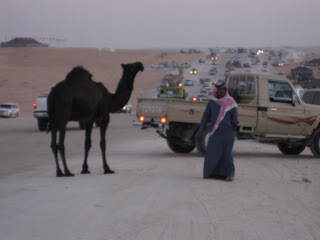 Organisers say 24,000 camels have participated at the event, at an estimated value of US$2 billion, whatever that means. The camels were all of the one-humped (dromedary) variety common to this region; I am not sure which ones I like better: the dark ones or those with a lighter hue. Thank goodness I don't have to choose. 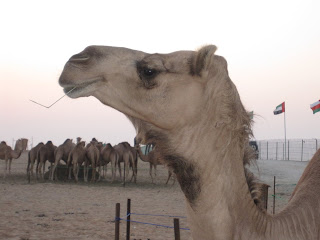 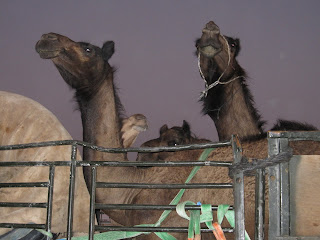 Among the highlights: we spotted two rogue camels running down Million Street, attached to no one. A giant SUV careened away from us, the driver yelling hello. We realised he could not have been older than 10 or 11. A momma camel "talking" to her three babies; and looking out over the desert and realising that, yes, we were at a camel festival. Also, on the way back, my friend told me a story about when she and her mom were visiting Rajasthan, India, and they saw two camels kissing - actually kissing - their owners struggling in vain to pull them apart. 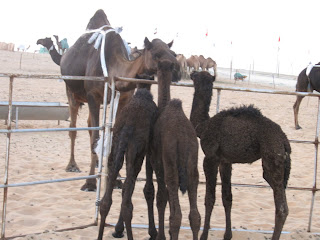 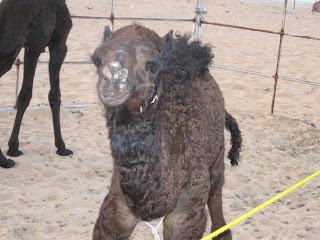 I don't know about camels curing depression but I did find this review of a movie, apparently about a depressed camel ;-)
Set in the Gobi desert of Mongolia, The Story of the Weeping Camel is a truly fascinating and special documentary. The filmmakers selected a single family unit to focus their filming on, choosing a family who own and tend 60 camels and 300+ goats and sheep. The family spans four generations, from great-grandfather all the way down to little toddler.
The film shows the family's day-to-day life in the isolated desert, tending to the animals, cooking, cleaning, and so on. They lead a fairly simple life and the focus of their recent lives is the pregnancy of one of their camels. After struggling to give birth, the mother rejects the baby camel, and two of the family's sons are sent to the nearest town to bring back a musician, needed to lead a ritual which will bring mother and baby camel back together.
The scenes of the birth of the baby camel, and even more so the ritual to help the camel suffering post-natal depression and her poor baby, are truly amazing.