Snap caption: Some members of the Abu Dhabi Police force pose with that mascot of theirs 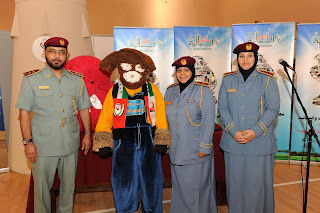 Detectives do their jobs, or:

Here we have an exhaustive examination by the KT on how many fingerprints Abu Dhabi Police collected in the first half of the year, augmented by this lively quote from an officer:

Doesn't have the same ring, but the feeling is familiar. It's the weekend! Time to head to Trader Vic's in the Beach Rotana and order yourself a Rum Giggle. 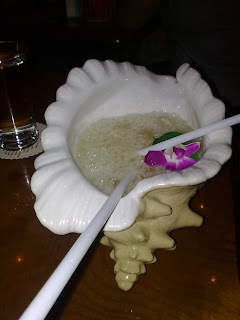 You will be jet-lagged... but maybe not so much

When I returned from my holiday in Canada last September, my life basically fell apart. The first night I couldn't sleep until 3am, the next night 4am. This continued through the week until the horrible night I was still awake – exhausted, in tears, desperate, but awake – at 8am. It took weeks until I was right again. Going back in time was tough on my body, and when I went home at Christmas I vowed that I would be more careful in my approach to the time change. I am a big fan of melatonin, and when I visited a health food store in Toronto to get some the proprietor told me what I needed when dealing with jet-lag was a "time-release" version, one that would keep me asleep for seven hours. That's also where I picked up these pills: 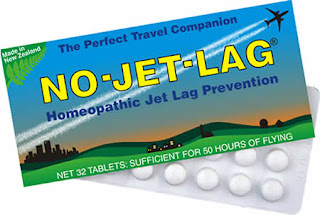 You take them every 2 hours while in the sky. I have no idea why, but they seem to make a difference. You may be laughing and thinking "placebo!" But really, who cares why it makes you feel better. All that matters is that you feel better. When I returned at Christmas I tackled the time change and overnight journey back from Toronto to Abu Dhabi with military precision, and returned to work the very next morning after flying in - relatively okay. Same thing after my most recent trip home. Sure, I felt a little fuzzy, a little out of it, but nothing like the torture I experienced last summer. So since I am becoming a bit of a long-haul traveller, I thought I'd pass on some of my recommendations for things to do to get back to normal as quickly as possible:

-Stay up until at least midnight, no matter whether you are going or coming.
-Put yourself on the time of your destination when you get on the plane. (As I had a connection at Heathrow, I did this in London rather than Toronto. A 15-hour journey can get really confusing, and you don't want to miss any planes)
-Drink A TON of water. More water than you want or can imagine. Shell out in the airport – it's expensive but they never give you enough on the plane. Those tiny cups with the paper on top are a joke.
-Don't eat very much on the plane or in the airport. For some reason, this helps.
-If you are flying back to Abu Dhabi from North America and losing 8 or 9 hours try to sleep as little as possible, no matter how tired you get. After watching an entire season of Nurse Jackie, I finally gave in on the Toronto-Abu Dhabi leg and slept for 3 hours.
-If you are flying the other way, overnight, on flights that often leave at 2 am, get yourself really tired then take some aids to knock yourself out once in your seat. Two Gravols (a Canadian anti-nausea over-the-counter remedy) and a double Jack Daniels has worked. Panadol Night has also done the trick. You will also need an eye mask, ear plugs and a fluffy neck pillow. Sleep as much as possible.
-Eat before you get on the plane – don't even bother with the food. It's usually gross anyway.
-Take No-Jet-Lag throughout the trip as much as you can.
-Every night for a few days after landing, take time-release melatonin before you go to sleep. (But don't bring it in to Dubai, it seems to be illegal there)
-No other naps during the day!
-Try to exercise as soon as you can and keep it up.
at July 21, 2010 3 comments:

Giving up the paper cup, and yet not quite

After writing this piece on ways we can start trying to be more environmentally responsible in this plastic-loving, rubbish-tossing place, I am going to be writing a little eco-tips column for The National's House & Home section on Saturdays. For all my Sigg-bottle carrying ways, I have fallen down badly, eco-wise, since arriving in this country and I vow to do better.

And, of course, Abu Dhabi seems to conspire against me in any efforts I do make. Witness the sudden removal of the Spinney's recycling depot just weeks after my New Year's resolution to recycle each week. (In retrospect, my plan to use a taxi to drop off all my papers, cans and bottles wasn't the most tenable.)

As the piece on the weekend was about doing what you can (aren't they all, really) I realised while writing it that I had to stop getting my daily skinny lattes from the office Gloria Jeans in paper cups and switch to my mug instead. So to much ridicule (and a bit of uptake from several nice colleagues) I encouraged our newsdesk to shift. I have been doing this for several weeks. Then, Ismeal, tea boy extraordinaire, returned from his extended leave back home in Bangladesh and insisted, as he does, on getting my coffee for me. This is what he brought back - and what he continues to bring back because I feel weird telling him I don't need the lid. 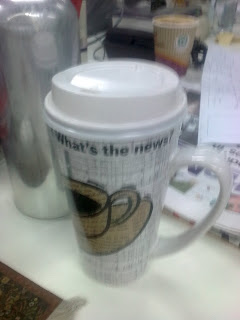 The Mastaba: Abu Dhabi’s answer to the pyramids - The National Newspaper

A great piece by The National's Matt Kwong on a plan by the eccentric artists Christo and Jeanne-Claude (island wrappers, orange-flag erectors extraordinaire) more than three decades in the making that could cost up to half a billion US.
(As an aside, Christo and his late wife could teach us all something about tenacity. For the 22 installations they have fought tirelessly for, 37 – including The Mastaba – have never happened.)

ABU DHABI // Taller than the Great Pyramid of Giza and built from thousands of multicoloured petrol barrels, the towering structure in Abu Dhabi’s open desert would be visible from kilometres away.

That is the vision for The Mastaba, a 150-metre high sculpture that has languished on the drawing board for 33 years.

All the single ladies... you have to like these numbers

Canadian weather forecasters have been lying to us all

Ontario radio weather forecaster: Well folks, it's 35 out there, but with the humidity, it feels more like 45.
Me: No it doesn't.
I have just returned from a glorious visit to Ontario and Quebec, one that was marred only by last week's "heat wave". I say "heat wave" because it was 31 to 35 degrees Celsius outside for about five days in a row and after living in the UAE for two years, and most of the time, that actually felt quite pleasant. And living on the island of Abu Dhabi, where one often has to defog their sunglasses when hitting the blast of unpleasantness that is outside during the summer, anyone else talking about humidity is a bit of a joke. (No one in Canada thought it was a joke though, as many people don't have air conditioning. I even witnessed two lanes of Hwy 401 that had buckled in the heat.)

Still and all, it was during a four-hour drive from Ottawa to Toronto that I heard the same refrain from weather forecasters over and over about the "humidex" and how it mysteriously made the temperatures jump by 10 degrees. That's when I realised I have actually been hearing – and believing – this schlock since I was a child. You know what feels like 45? 45. Trust me.
at July 14, 2010 1 comment:

Tthe Federal Supreme Court has ruled that a husband divorced by his wife must pay half her marriage dowry if it can be proved she was abused. It is hoped this will prevent men from harrassing and bullying and abusing their wives into divorcing them. This "happens all the time", according to one attorney.
Court sets landmark ruling on divorce - The National Newspaper
at July 06, 2010 1 comment:

Normally I wouldn't say "check out this fascinating piece on garbage"

Fake Plastic Souks lays out the details behind a successful, albeit overrun, five-year project to remediate an emirate's out-of-control landfill: Sharjah and Kyoto
I have to say, when it comes to dealing with its garbage, Sharjah is really getting it together.
at July 06, 2010 No comments:

Does anyone hate it? In between? Not that I'd be able to figure out how to switch it back to the old one - I changed it on a whim - or that this sort of thing matters, really, but I want to make sure you can read what's here when you take some time out of your day to drop by.
at July 06, 2010 4 comments:

You know, those "skinny, pretty women with no morals" who prey on married men whenever they venture into public

It's hot in the UAE by now, freaking really hot (which is why I am sort of irritated at being in Canada in the middle of a heat wave, but whatever) and the summer school break has started. That means some lucky "Jumeirah Janes" and "Abu Dhabi Angies" (I just made that last one up) and their offspring get flown back to parts of origin, or just parts cooler, while hubby works it out with only a couple of weeks to join them. Apparently, according to Annabel Kantaria writing at the Expat - My Telegraph blog, they used to get up to all sorts of shenanigans, but not in 2010. This year, it seems most are limiting themselves to a pint and a pie.
Are Dubai’s summer bachelors a dying breed?
at July 06, 2010 No comments: 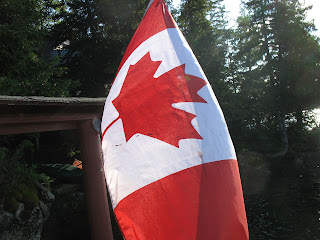