Arabs do not mess around when they send flowers

These are the arrangements sent to a colleague the other day. They were, as you can see, massive. And no, they were not intended to mark the passing of a dignitary or the birth of another of Sheikh Zayed's grandchild. I'm told they were sent, as so many bouquets before them the world over have been, intended to say "I'm sorry".

This was the view from my desk: 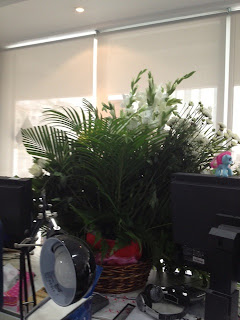 I read this issue on my iPad on vacation in Bali a couple of weeks ago, where things are different from here and I didn't give it a second thought. (Other than 'wow does Kate Walsh look good for any age, let alone 44' and 'where are my shoes I am going for a run now')

But then I was in Spinney's this morning gazing at the magazine rack and caught myself wondering why Shape was in a plastic bag. 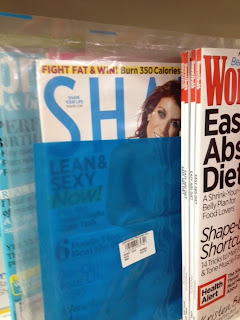 The cover uncovered after the jump...

Email ThisBlogThis!Share to TwitterShare to FacebookShare to Pinterest
Labels: censorship

The Burj Monument to the Burj Khalifa: Because what you need near the tallest building in the world is a monument to it 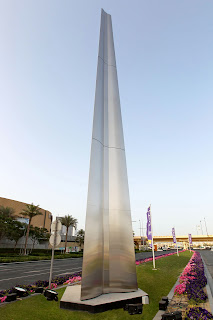 Here it is: 18 metres high, three cores, stainless steel near the Dubai mall "on a unique visual plane aligned with Burj Khalifa", according to press release this monument to the Burj Khalifa (located within sight of the real thing, naturally) represents Emaar's "token of gratitude to the people of Dubai and visitors from around the world", "an architectural art", modelled on "the world's only 'Global Icon".
at March 20, 2012 2 comments:

I was walking by the mall the other Friday afternoon, in the very best of moods. I'd just seen a picture of my healthy new nephew, all safe and sound out of his mom's belly. I was also going for a massage, which I was very much looking forward to - and because I'd taken Saturday off I had a whole other day of my weekend to look forward to.

And then, when I didn't think my day could get any better, I saw this:

Shout out to InterNations: Thanks for reading, guys!

Thanks to the expat organisation InterNations, who have chosen A Canadian in Abu Dhabi as a top blog in the emirate and chose yours truly as the first local blogger to be profiled. Much appreciated.

InterNations is website that draws expats together online, with varying levels of free and paid memberships, but they also hold regular get-togethers out in the real world that I always intend to go to.

They have been in Abu Dhabi for a while now and have built up a real community. So if you feel like branching out and meeting other expats from around the world, check them out.

Have you seen the assorted exercise stations on the Corniche? They are very cool, and I am all for exercise options that don't cost us a dime. But every time I walk or run past this squeeking oddity – also known as the world's oddest stationary bicycle – I can't help but laugh. That board, right in front of your face! All that nice park behind it, out of sight. And the noises it makes! Sounds like a tin can factory. 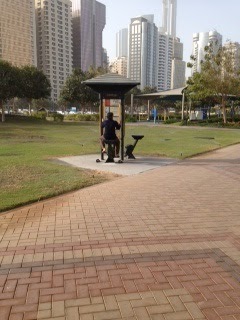 Breakthrough in Canada-UAE relations: Not the most important development in international relations, I realise 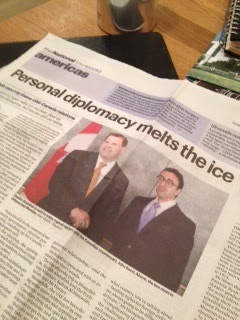 It is, however, very good news for tens of thousands of citizens of both countries living in the opposite country (like me!) not to mention a boost for all the business people are trying to do.

You can read more here in The National's full story, but essentially a row over UAE airlines' landing rights two years ago sparked the situation to deteriorate, and the UAE slapped a bunch of visa restrictions on visiting Canadians including a steep $250 Canadian fee just to visit. But apparently that all changed earlier this month, when the UAE's foreign minister, Sheikh Abdullah, paid a visit to Quebec's cosy Chateau Montebello and went dog-sledding with his counterpart in Canada, John Baird (who many people blame for the situation in the first place, but oh well). It's the image of these two frolicking on a sled being dragged through some dazzling white powder that is giving me cause to grin.

The ball was already rolling, after Baird paid a low-key visit to the UAE in November, while apparently the UAE has been doing some lobbying of its own of late, in the form of hiring a Canadian firm to get its message across to the government.

There is no word yet on the visa fee being dropped, however, but we can be hopeful.

UPDATE: Commenter Moe is in the know: he says look for the visa fee to be lifted this month or next.
at March 16, 2012 4 comments: 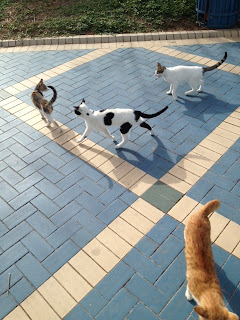