I had a lovely set of photos to illustrate just what has been going on in Abu Dhabi leading up to today, but as I have previously explained, someone has stolen my camera. With all the photos. So, words will (mostly) have to do. The nation is 37 years old today and boy is it proud. I have a little experience with this, having lived in Canada's capital for so many July 1sts. But to witness such displays of patriotism here has been nothing short of fascinating.

Many of the cars, as you can see from these donated photos from my good friend at Sand Castles in the Sky, have been be-Sheikhed in the most hilarious ways. Other cars - big manly ones, like Land Cruisers – have been decorated with green, red, white and black heart stickers or ribbons streaming from the door handles, or both. Or if they are a little older, they have simply been spray painted, graffiti-like. 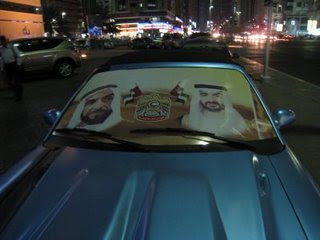 Right now, outside, all that can be heard is the sound of celebratory honking and helicopters in the sky. A giant fireworks display has just wrapped up down on the Corniche, the walkway along the water. The entire city is on holiday until Dec 11 (can you imagine?) and people have gone to town with decorations. There are lights around the trunk of every date tree; lit "37"s all up and down the grass separating the lanes. Buildings are covered in lights and flags.

People have donned flag dresses, flag hair ornaments, flag scarves, complete with Sheikh Khalifa's face on each of the ends (that was the security guard at work, Mohammed). I have also seen cardboard crowns, complete with the Sheikhs faces. Tonight I walked by a group of Emiratis, with a giant flag attached to their car, who were unloading a trunk full of super soaker water guns. I have no idea what this has to do with National Day. And I have just received a report that things are still in a frenzy downtown.