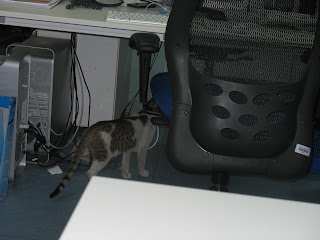 I was in The National newsroom working very late one night, in a rare moment by myself, and the sight of wild cats sneaking around in my peripheral vision kept giving me chills. There are an estimated 10,000 wild cats in Abu Dhabi. Many of them, like the crew that lives in the courtyard of the newspaper, have been rounded up and spayed by a group called Feline Friends, as evidenced by the giant chunks missing from their ears. There has also been talk of a "culling" program, which is something I do not want to think about. 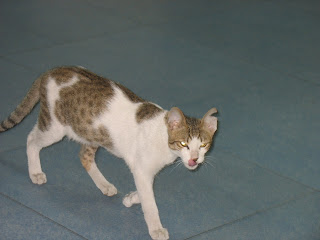 The cats at work are often quite funny. There is one that stands on the roof and yells at people as they enter and leave the building. Now and then one of them wanders into a full newsroom, and that scenario is usually marked by loud caterwauling and, one time, a trip to the hospital by a reporter with a nipped finger. These cats do not enjoy being cornered.

Several of them often scrap, while others regularly get into garbage that must have ink from our presses, because I see them walking around with big green or red blotches on their fur. They are also very fond of leftover Chinese and Indian food, which the building's cleaners regularly feed them. My friend Charlie, a sports editor here, has adopted the cats. He gathered money for them to be spayed and feeds them every night. If he's late, they let him know about it. He had a conniption one day, and rightly so, when he saw that a work crew had used their blue water bowel as a receptacle for paint thinner.

Happily, the cats all survived it and are wandering outside as I speak. And then there is Jeff, the resident cat at my hotel, one of the gnarliest-looking and neediest cats I have ever come to know. Jeff likes tuna. A lot. 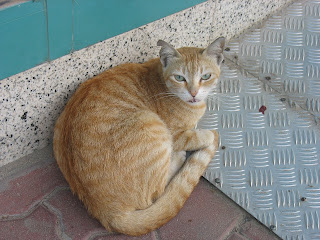