And then it sunk in: I really won't be going home for Christmas 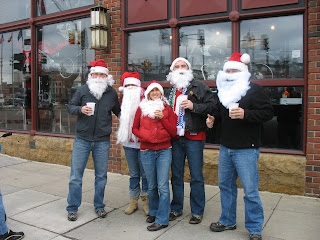 (December 2007, before an NFL game in Detroit. That's me, my bro and his wife - the tiny one - on the left. Yes, we were the only santas in the stadium that day)

Each year (except for one, I will get to that later) I have spent the holiday at that same green-and-white bungalow across from my old public school in London, Ontario, Canada. I can picture it: snowbanks piled up on either side of my dad's grey minivan in the driveway, multi-coloured lights wound with garland around the post on the front porch and a red glow from the same three faux candles that are always hanging in each window. It was only in recent years that my father stopped putting up the wreath I had fashioned from garbage bags, decorated with plastic fruit and sprayed with canned fake snow back in eighth grade. That was probably for the best, although I still hope he didn't throw it away.

I knew I wouldn't be going home this year, never planned on it, and have actually given the whole thing very little thought. But the other night, as a couple of married colleagues left the office to gather up their children and fly home to the (conveniently close) UK, and the male half uttered a lovely "Merry Christmas guys", I got a giant lump in my throat and my eyes misted up and I felt quite panicked and it hit me that I was staying put.

Is this normal, I asked an experienced expat who has missed many a family event.

The hardest Christmas ever was 1997, just weeks after my mom died. We went to Florida that year, just to get away from the whole thing, my dad and brother and I, and on the 25th we cooked a ham to try and be different. It was awful. And to be frank, I haven't really felt the same about the holiday ever since. Anyone who has ever lost someone vital will know exactly what I am talking about. But it was a big consolation in the following years that no matter how much I longed for my mom I would get to spend time with my two other favourite people on earth.

I don't regret coming here to Abu Dhabi. It's actually been quite transforming, when I stopped freaking out about it. And Christmas Day will offer a host of treats, apart from a routine appointment with the gynecologist in the morning – why not the 25th, I thought, when the date was offered as the earliest available - and my scheduled shift on the revise desk. I have made some pretty great friends here, and I plan on seeing them after work at two different events. There is no use pretending: I am sure we will drink, and possibly heavily.

But there are times (and the other night was one of them) when I think I must have been a crazy fool to move so far away from the people who matter most.
at December 20, 2008

Oh Anne Marie, Just remember, its only one christmas away from home . I was in Austria for xmas 1998 and when I called into my annual girls xmas party and talked to each of my friends, I missed being there. However then next day I skied the glaciers in the Austrian Alps, Priceless. Just remember you can make your holiday special by doing something with your expat friends that you will always remember... for 1997xmas we all got together and had a xmas dinner with each expat bringing a traditional dish from their country.. cancel your gyno appointment and make it a time to remember with your new expat friends.
Sarah

I can relate to what you are feeling. When I was in the States studying to get my engineering degree we missed a lot of Ramadans and Eids here in the UAE. It was hard at times but I knew that what I missed at the time was a small sacrifice for a greater tomorrow.