I was eating some California rolls when I noticed the birds 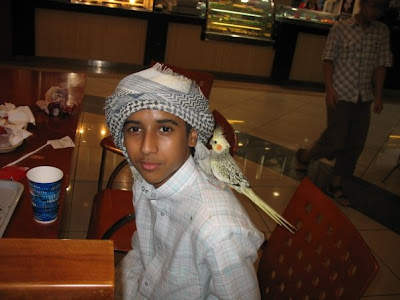 So I grabbed some sushi the other day at Al Wahda Mall, and was I as enjoying it in the food court I noticed three teenaged boys sitting at the table next to me. They had brought their pet birds to the mall. They were also smoking, which I suspect they thought made them look cool but didn't because of course smoking isn't cool, but mostly because of the birds.

This guy is 16 and he calls his bird Pooley. I kept trying to get a picture of all the birds but eventually I stopped because I think I was annoying them.
at August 21, 2008