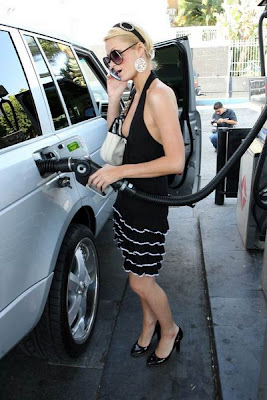 But not people in the UAE. No way. Not until now. You see, the times are a-changing. And gas companies, like Enoc, see the beauty of the self-serve pump. They know if they get customers inside, they might buy something extra. And though they say yesterday's launch of a pilot project at 10 pumps in Dubai - which forced people to go self-serve, much to their chagrin - was not a cost-cutting move, it does not take a genius to see that without attendants, there are no attendants' salaries to be paid. It also made me giggle when a company rep told The National the move was made to be part of a "global trend".

They've set it up all wonky though. First off, they intentionally introduced this in the hottest months of the year, basically on the logic that if people will pump their gas when it's 50C, they will be happy to pump their gas at all other temperatures. Then there is the payment system. People must pay upfront, inside, forcing them to pick a figure that may or may not fill their tanks to the brim. We all know how satisfying a completely full tank of gas can be, so this is turning out to be a problem. One man even worried about all the smokers, who might forget their lit cigarettes and accidentally set themselves on fire.

But back to the heat, and one of the most unintentionally hilarious stories The National has run so far.

“Look at me: I’m sweating profusely,” said Joseph Lobo, 36, an Indian hairdresser. “It’s far too hot in this country for a system like this and it’s a waste of time. I’m in a hurry to get my car in for a service, and this is just delaying me.”
at August 13, 2008

Well the issue is not entirely about being lazy to pump gas - the issue is culture. Picture this: people pumping gas with the car running, smoking whilst pumping, talking on the cell - and jumping the queue whilst paying in cash!

It's not about pumping gas by self, I think the larger issue is culture/ways of life in that part of the world.