McQueen Abayas: Yes, it's true, there really are two 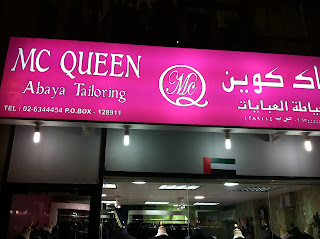 First this, now this. Of course it's quite possible it could have been the other way around - I am only just learning about this one now. Is it because of Alexander, do you think? Or the late 60s and 70s-era film actor Steve? Or the British director of the film Shame, also named Steve? Or does McQueen mean something totally fashion-y in Arabic? Google Translate tells me no. I do love the logo here though.
at February 13, 2012

Just discovered your blog and have to say it's frickin' hilarious. Nothing terribly interesting to contribute (story of my life) but thanks for the giggles.

this shop is somewhere around muroor road right?i noticed this myself, and just so you know the logo looks a bit like Alexander McQueen's diffusion line McQ.
:)
lowell-myblog.blogspot.com