Rant for the day: Dear Starbucks corporate, you can do better 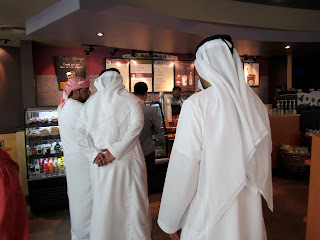 Starbucks is popular the world over for the same reason a lot of chains are: it's a powerful brand and when I am sitting in one in the UAE, I could almost be back home in Ottawa – save for the mall setting and the khandouras and abayas, that is. Their coffee gives you a kick in the pants and their staff are almost always awesome.


There is one thing that is different, however, and it's not just that I can't seem to get a chai tea latte or sugar water for my iced drinks here. On a recent Saturday after completing a shift on the newsdesk, I stopped into a Starbucks for a nice hot drink. The lovely staffer said "the weekend is almost over" and I said "well I actually worked today" and he was shocked and that got us started on a very illuminating discussion about our respective work environments. While I had earned a lieu day for my weekend work, and am paid well overall for the work that I do, he must work six days a week – without extra compensation – and can't even count on regular days off. He often does not know what day off he has any given week and can expect to be called in on those days as well. (If he is called in, he explained, he doesn't really have the option of saying no). He is also regularly expected to be in for an early shift, even if he has worked late into the night. We did not discuss his pay but I imagine it is quite low. His co-workers said they worked six days a week too.

This would be shocking back home, of course, but here the six-day work-week is perfectly legal – and in fact the standard – for much of the population. When my friends tried to get a job for their nanny before heading back to New Zealand two years ago, they were shocked at how many people required that she work six days a week. (And take half the pay, but that's another story)

But just because a six-day work week is standard and accepted does not mean it is right. The whole thing has me quite grumpy and thinking: shouldn't companies like Starbucks address this kind of stuff before they agree to set up shop or franchise in countries? Shouldn't corporations like Starbucks that like to publicise their ethical credentials back up their claims and consider people as well as profit, all over the world?

In the West working at Starbucks seems like a pretty good gig (and rare is the grumpy barista, you have to agree). Each Starbucks employee is considered a "partner" in the company. They get paid time off, health benefits including life insurance, disability, drug, dental and vision, stock options, a retirement savings plan, adoption assistance, domestic partner benefits, emergency financial aid, referral and support services for child and eldercare – even career sabbaticals. Also, awesomely, every employee gets a free pound of coffee every week. I had thought this was an urban myth.

I do not think they have to work six days a week, unless of course they want to. Also, the website trumpets that Ethisphere Magazine recently named Starbucks as one of the 2011 World's Most Ethical Companies.

People should have more than one day off a week. The good people in Seattle know this, and they could do the right thing in encouraging other lucrative corporations operating in countries like the UAE to be more fair by setting a positive example on a five-day work week and publicizing it. After all, unlike their counterparts in the West, most of the workers in the UAE are expatriates who do not have the freedom to say 'take this job and shove it' when they don't like the conditions. They are operating under a sponsorship system so common in Gulf countries, where your boss is also your guardian and the source of your residency visa, that simply does not provide for that kind of personal empowerment.

UPDATE: As a commenter pointed out, any company setting up here must be majority-owned by a UAE national. There are already Starbucks everywhere. But the six-day work week isn't just a problem in the UAE: it's standard across the Gulf and much of Asia too. So, yo, Starbucks. As you continue to take over the world, consider making a 5-day work week, and other, more fair conditions for your employees, a pre-condition for those wishing to land a franchise or operate a corporate store.

Email ThisBlogThis!Share to TwitterShare to FacebookShare to Pinterest
Labels: Rant for the day

The problem is that the brands head offices don't run their outlets in the UAE. The big Emirati families such as Al Futtaim, Al Tayer or Bin Hendi invariably own the franchises and the malls and thus run them according to their own standards --disgracefully. Unfortunately what you describe is the norm for 99 per cent of service and retail staff in the UAE on whom everyone depends. One of the reasons I left.

Exactly - that's why I am saying that big corps like Starbucks should back up their ethical claims by demanding fair working environments before allowing franchising in the first place.

For the few remaining plots of land where they haven't already set up shop, that is. You know, Yemen, that kind of thing.

1) Starbucks - and any other company - is not forced to make people work 48 hours a week (the legal maximum), they can choose to hire more people to make the work load less on the staff. Its a choice that a company makes, not the UAE law, and I think that blaming the family corporations is a false way of placing the blame.

2) I'm a Canadian who works in HR in Dubai, but I have seen plenty of Western HR 'professionals' who carry out activities that would be 100% illegal in their countries (discrimination based on nationality, ethnicity and gender). Why would they apply different standards here than they would back home? When a developing country relies on western expats, it does so in the hopes of introducing new and better practices than it currently has, yet what we see is western people (and organizations) following the norms here because it is 'easier'.

I think Starbucks is only a symptom of the real problem: humans as a whole will pick the easy way out when they could.

Moe - those are awesome, thoughtful points, both about the families and how people from the West can change the way perform their jobs when they get here. Thank you so much. It's nice to get an HR perspective (and from a Canadian!)

And "chai latte" - that would be what we call "milky tea".

Actually no its not, Chai and Tea are the same word but the word 'Chai' has nothing to do with Cantonese or Mandarin. Chai is a word in Urdu / Hindi which means tea. The reason you have this variation in Canada is possibly because of the large number of immigrants from the subcontinent.