Any recyclers out there? Welcome to my new year's resolution

It will include frequent visits here, a spot outside Spinney's, one of several recycling depots around Abu Dhabi. It's only one of two that I know of. (The other is by Jones the Grocer, and much closer to where I live, but all the wrong things are in each of the bins, so I don't have much faith that things left there will be recycled properly). 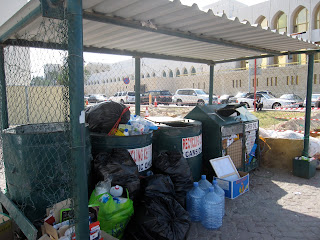 It is one of the surprises upon moving here, that most everything is still just tossed away, clogging up landfills in the desert. After doing interviews for an article in Canada's the Globe and Mail, I was inspired. I have been living here for more than a year and a half, and until a few weeks ago, had not recycled a thing. The amount of garbage I have thrown away in that time has appalled me, but so has the thought of trucking bags of newspapers, cans and bottles all the way to the other end of town – in a taxi, no less – every week or so. Well, no more. I was a major recycler back home and should be in my adopted country. It hit home when Habiba al Marashi, co-founder and chair of Emirates Environmental Group, said expats are a major part of the problem.

"This is a transient society," said Ms. al Marashi. "People think 'I'm not here for long, I won't have an impact and I'll do it when I go back home.' "

And as another woman told me, although it didn't make it into the final piece, just because something is hard or inconvenient doesn't mean you shouldn't do it.

And with Abu Dhabi set to introduce door-to-door recycling by the end of the year, it will only get easier. Inshallah.
at January 10, 2010

Same feelings here. I'm in Canada at the moment but when I'm in Qatar I feel guilty throwing all my rubbish down the chute. Automatically I sort it as I go along but my husband keeps reminding me thats its all for nothing. Keep up the good work