Fork finger says in plastic what the flesh cannot

It is illegal to make rude gestures in the UAE, and that most definitely includes those of the middle finger variety, something people should know when they arrive but sometimes figure out the hard way.

One of my colleagues, a veteran journalist who engages in hilarious, daily mock arguments with our boss (at least I think they are mock), devised this little alternative a couple of months ago: 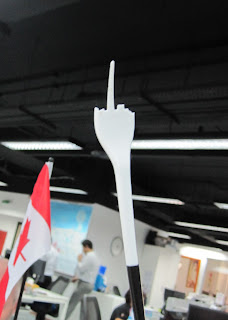 As an aside one of my best friends here, a gentle Englishman who I imagine has never given anyone the finger in his life, was once mistaken by the male Emirati driver behind him for throwing such a gesture. My friend had simply raised his left hand in frustration as the man honked and pulled up too close behind him as he attempted to merge. (He was new here; it would take time to earn this happens on the quarter hour on UAE roads, where a nation of impatient drivers honk at you to go before the light has even turned green) When he looked at his phone later, some of the many missed calls were from the police - a few were from work, who had also heard from police. Several hours later, after he had presented himself to the police station, offered chocolates, apologised profusely, showered his accuser with gratitude, he was free. But he left with the knowledge that if the Emirati in question (who was so angered by the gesture he thought he saw that he drove immediately to the police station, family in tow, their day's activities no match for the need to pursue and punish this perceived slight by an outsider to the full extent of the law) had not dropped the complaint, he could have been looking at a jail sentence of several months. The story, obviously, is now legendary.
at December 11, 2010

It's not a secret that the retributive laws in UAE are very ridiculous and exaggerated.

What is worse is that the laws are often one sided. Some people have been known to do these same things without any fear of retribution.

I notice you haven't posted in a few days. Hope you aren't in trouble over the fork. . . .

Sorry to hear that. Hope you get better soon. I look forward to your posts.

get better soon- hello from Vancouver- raining buckets. Most of the places around the world one has to be carefull with gestures.

Get well soon. Your absence is unbalancing the universe.