A different Christmas, in Abu Dhabi

I was walking around my neighbourhood Christmas Eve and day, smiling because so many people took care to wish me well. The little man at the corner store, his Sri Lankan newspaper spread out over the cooler, rushing to get me a bag for my soda water, smirked a little before saying a shy "Happy Christmas". Someone yelled it out across the street to me, waving. On the 23rd I had to compose myself, feeling a rush of tears when one of the tea boys at work, a regal man, handed me a Christmas card he made. He made them for all of us, all of the people at the newspaper who barely give him the time of day. As I thanked him, he explained that he took one printout to a copy centre because it would have cost too much to print out all the copies. He put them in envelopes! How freaking kind. 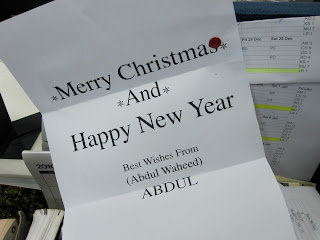 Some colleagues were putting together gifts for the Filipina maids, the ones who flee their employers because they are abused or aren't paid and stay at a makeshift shelter at the embassy and labour offices. As soon as the email went out I thought "I am going to help with that" and about a minute later my boyfriend popped by with Dh200 in his hand. I hadn't asked him for it, hadn't told him I was going to put together something, and him offering without me asking and him just knowing that I was doing something melted my heart just a little more. I got so choked up, picking out soap and lip gloss and necklaces and pairs of horseshoe-shaped earrings. It's so little I thought, and they are going through so much. I'm still not sure about it, but everybody likes a present, and here was a bunch of 'em. 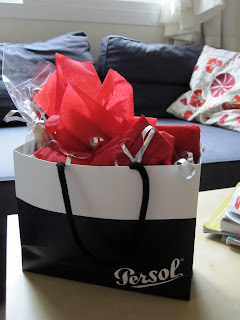 This year was a bit difficult. I'm not with my family, not with my boyfriend, who is with his family. It was a first for me. A character-building first.

Abu Dhabi is kind of sad right now, and frankly, so was I, in the days leading up to Christmas. I didn't feel like celebrating. I felt blue. This year more than any other I know so many families and friends who are grieving some sort of loss, it's almost palpable. This year more than any other I so keenly felt the pain that is out there, felt my respect for those who are able to smile, or even just go on, in the midst of true and deep heartache.

But Christmas wasn't sad, do you know what I mean? This year it was like through feeling alone I got to the true spirit of it. The beauty of it. That all we have are our family and friends, the people we hold close. That all we have is right now, the sun that's shining, the computer in front of us, the laugh we just had at the joke we just heard. That we "blessed in the West" people (even those of us not currently in the West) can thank our birth order for passports that let us move around the world freely, for being born in countries where we can whine about earning tens of thousands of dollars a year or not feeling fulfilled or where we can toss around words like "retail therapy" or, let's face it, even "therapy", in all seriousness.

I meandered around the city on Christmas Day, watching people have picnics, the guys at the laundry working away like any other. I went to Mugg and Bean for a latte, and while I was there I got the idea that I would tip the waitress everything in my wallet. It was only 120 dirhams, but for a latte that's pretty good. She was from the Philippines, and I bet she wasn't very happy to be working on Christmas Day. I hope that tip made her smile. I know leaving it made me very, very happy. I talked to my family. I tried to see my six-month-old niece Lily on Skype, but the connection wasn't very good, so I had to make do with hearing some happy baby gurgling. It was enough. It was more than enough.

My mom was into scrapbooks, and so am I. Her mom was too, something my mom found out when she found a thick one about six months after she died. The book had everything and it was godsend, she explained, as she handed over one she had made for me decades later as I was about to graduate from college. I loved it of course, but I wouldn't relate to the "godsend" part until my mom died too, a couple of years later, and the assorted words and wisdom she'd written and pasted in that book were all I had to go on for awhile.

I bring it up because as I sit today in my favourite red leather chair in a place I never thought I would be a world away from where I came from, a weird and strangely wonderful Christmas 2010 behind me, feeling more peaceful, more grateful than I can recall being in a long time, I can only remember one of the quotes my mom included from the 12th century German theologian and philosopher Meister Eckhart:

"If the only prayer you said in your whole life was 'Thank you' that would suffice."
at December 26, 2010

Glad you found yourself. Next year, come to our place and share your wisdom - it will be welcome

Aww..that's card's gotta to make you worth more, than the 43 foot diamond studded international embarrassment at the Emirates palace eh.

So, perhaps, diamonds may not be a girl's best friend, after all?

This made me cry. A very very beautiful post, Ann-Marie, and I hope you never ever find yourself alone on Christmas ever again, and instead always surrounded by those who love you and care for you. :)