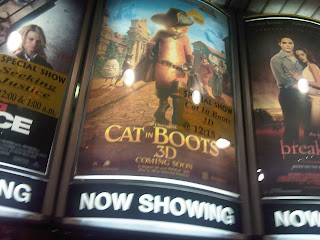 The censors say it wasn't them (not that I am suggesting it would be for any reason... so why change it? To make it more relatable to Gulf audiences? It's Cat In Boots in Bahrain as well.

UPDATE: The National's Scene&Heard blog contacted both the National Media Council (no censorship, they said) and the local distributor.

Four Star Films says nothing was cut and as for the title: "It is common practice to many foreign territories outside of the US to change a movie title to suit their territory better, which is what we did with Cat In Boots".
at November 23, 2011