Unsubstantiated rumour of the week: Lululemon coming to Dubai?

So I was at Soma Pilates/Yoga Tree off Khaleej al Arabi street this morning, lying broken on a Reformer bed and wondering how I would be able to walk to the taxi stand outside, when the instructor mentioned that she heard a Lululemon store was opening in Dubai.
Whaaaaaaa? First off let me say I would be pleased to hear that this successful Canadian trendy yoga wear company is expanding to such an unlikely local and I look forward to seeing Jumeirah Janes of all shapes and sizes freaking out over the cool new black clamdiggers and assorted bright hoodies they will never need to wear outside. Secondly, of course I am not bitter that I failed to buy Lululemon stock after their PR woman in Vancouver told me several years ago the company would be going public. Why would I? I mean, people are like lemmings to this stuff and the company is expanding all over the world.
There is already a looooot of Lululemon in the Gulf already, judging from what I see at local yoga classes. This stuff has definitely crossed borders. Personally, I have some fatigue. On my most recent trip to Canada, a few weeks ago, I didn't even buy anything! It was a watershed moment. I just walked away.
Below is my friend Amber, an official Lululemon ambassador, wearing a Lulu ensemble. She is a kick-ass yoga teacher in Ottawa, teaching mostly at the Preston Street Moksha Yoga. Go. 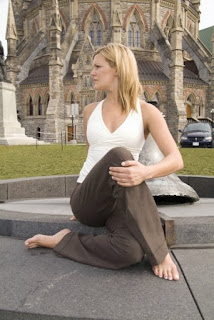 More about my Lululemon history, after the jump.


The Ottawa Sun
January 31, 2008 Thursday
FINAL EDITION
Gone loony for Lulu;
Get ready for long lines as city hosts first warehouse sale
BYLINE: BY ANN MARIE MCQUEEN
SECTION: NEWS; Pg. 2
LENGTH: 654 words
It's embarrassing.
Of course, splurging on a $93 hoodie sweatshirt should be embarrassing, even if it was in my favourite shade of luscious hot pink, even if I did stalk the hoodie pile at the Rideau Centre store for months to get the perfect colour.
When I take an inventory of my Lululemon Athletica wardrobe, I am left scratching my head. A warmup jacket, track pants, short and long, two pairs of three-quarter yoga pants, one pair of shorts, two T-back tops and one crossover with a scoop in front. Oh, and the hoodie. And the patent bag I had to have just before Christmas.
It started two years ago when I tried on a pair of pants, and became instantly smitten with how they magically transformed my nether regions. Flash forward and I'm horrified to realize I've spent almost $1,000 on workout clothes.
The realization is amplified whenever I take a gander around one of the city's yoga classes: There, before me, a sea of $150 costumes, worn solely for sweating.
It's ridiculous, when you think about it.
I bring this up because of what is happening in Ottawa this morning: At 10 a.m. the Vancouver-based yoga wear giant will open its doors to Lansdowne Park's Aberdeen Pavilion for the first-ever Ottawa warehouse sale.
WAIT FOR HOURS
Outside those doors, I predict, will be thousands of shivering women of all ages and sizes and backgrounds and economic means. Some will have called in sick to work. Others will have hired babysitters. Many will wait for hours. A portion work out, probably half. The rest want to, but generally don't.
I can predict this because when these warehouse sales have happened before around the country, women arrived at sunrise and waited for up to four hours to get inside. When Calgary's first Lululemon sale opened last week, it was, to quote the local media, "Lulu lunacy." Thousands arrived at the Calgary Stampede grounds. The company hired 350 University of Calgary students to staff the event.
We won't know about the protesters, the anti-Lulus. They won't be there, with the rest of the breathless sheep concerned only about scoring last summer's out-of-stock styles. They are above this fad, and good on them.
Lululemon gets a lot of flack, mostly because their clothes are trendy and outrageously expensive. The company is also kind of preachy: Their all-encompassing corporate manifesto -- drink lots of fresh water, perspire, do one thing every day that scares you, etc. -- is pasted onto every one of their coveted and ubiquitous reusable shopping bags.
Lately, when you go to the company's website, your cursor leaves a trail of Lululemon symbols everywhere you put it. Staffers are called educators, and when Chatelaine magazine exposed the company's links to the controversial Landmark Forum, it made a lot of people queasy.
Owner Chip Wilson credits his success to the expensive international program, which has been criticized for having a secretive nature, boot camp mentality, and links to a former member of the Church of Scientology. Lululemon managers reportedly must take a three-day Landmark Forum seminar, though the company pays for it.
I've also heard complaints the store staffers are too cheerful, but that just seems mean-spirited. I suspect they are just high on the company discount and fumes from the markers they use to write customer names on the changeroom doors.
When I look at the phenomenon of Lululemon in hindsight -- the one that seems to have survived the seaweed-shirt scandal, the one with the major U.S. expansion planned, the one that was on Oprah, and in Vogue, the one with the phenomenally successful IPO last summer -- it seems like the company happened along just when Canada's thirst for luxury and search for some sort of meaning perfectly intersected.
After all, any time you can make people feel all touchy-feely about spending their money, it's bound to be a runaway success.
Just take a drive by Lansdowne Park this weekend if you don't believe me.
at October 21, 2010