Um, no you may not come in

I opened my door this morning to retrieve the paper and this is what I found: 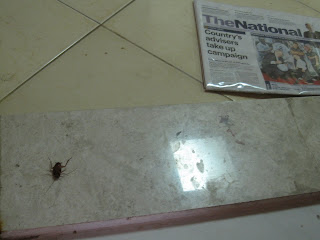 This bug is so big that it may actually have been knocking and, tiring, decided to take a load off for a minute by flopping out on his back. I prefer that scenario to the other, more nefarious one, that perhaps he was placed there by an unfriendly. I don't think I know any "unfriendlies", or anyone who would have it out for me in such a manner, but it does seem odd, doesn't it? A giant bug like that, on his back, on my doorstep? 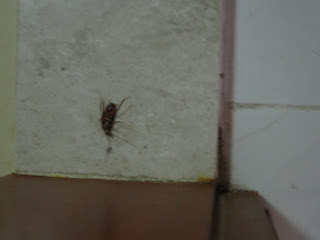 You may recall that upon arriving in Abu Dhabi I was relegated not to the nice hotel with the spa that I had been promised, but as all hotels in the city were full, a cockroach infested hotel apartment notorious for offering a grim stay. Infested. That made for a series of dire early nights, but I was soon moved to a non-buggy room where I was able to compose myself. Most of the rest of my exposure to bugs has been dodging the sort of dudes I found this morning in the ladies washroom at work and last summer being bitten by one (or a relative of one, perhaps not quite as big) as I talked to a colleague. When I looked to see what was causing the sharp pain on my leg, I screamed loudly in the newsroom and drew a lot of attention to myself.

Sure, I may have overreacted, but I ask, what would you do if you saw a bug like this on your leg? Anyway, I used a broken cutting board to shuttle that bug well out into the hall where I have been keeping an eye on it through my peephole. I suppose the humane thing would be to kill it, but it just seems too big for that.