Dubai: magnificent views and near vomit-inducing dune bashing. And camels. 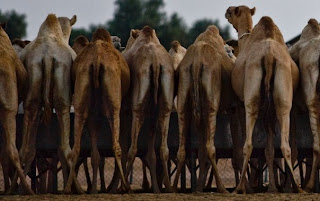 Finally. After 7.5 months in the UAE I saw a camel. Well, I saw a bunch of them, as the picture indicates. A few in the wild too, and I would have snapped a picture of those if I wasn't doing my very best not to be sick all over the back of a Land Cruiser.

We went on a safari, and sand dune bashing - or, as I like to call it, an excuse for driving recklessly - was the main event. My party was not really prepared for this aspect, have overrefreshed ourselves the night before. Many people loved it. I, however, am still nibbling on saltines and drinking ginger things. I should have known when they stopped all the vehicles and deflated the tires. 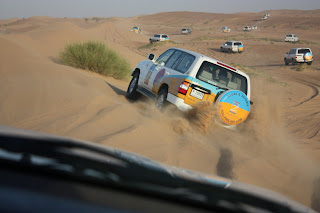 Anyway, a weekend outing to Dubai by a group of expats from Abu Dhabi was otherwise a success. There were the camels, and lots of other slightly hokey stuff, on the Orient Tours Safari I would have enjoyed were I not continuously nauseous. Tiny camel rides - as in walking around a circle - sand boarding and sledding. Also, oddly, belly dancing.

But you do those kinds of things when you go away, don't you? And even though you know it's all touristy, at the end of the day, when you are riding home in the dark, sandy and tired, you are glad you did.

Bonus: the picture below may look like one of those photographic renderings the UAE is famous for (I was sorely disappointed in Abu Dhabi at night when I arrived, simply because it did not look like the Vegas-on-the-moon pictures I had seen online) but it is not. Instead, awesomely, it is the view from my friend's apartment, on the 11th floor of a building in the Dubai Marina. Parts of it are really shaping up, aren't they? 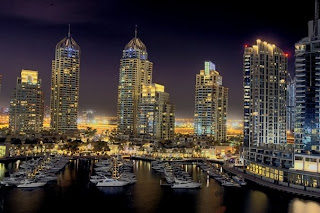 Hmm..lets see some pics of the belly dancer ;)