Be nice to your maid, the ads say 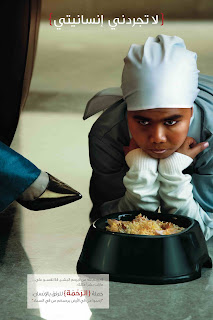 I wrote a story for The National last week about a new series of television public service ads that basically encouraged people not to abuse their domestic staff. (I would link to it but the paper's website is a little wonky right now) One of the ads shows a woman yelling at her maid in front of her friends; in another, a man yells at his maid and driver because they asked for their wages, which were two months late. Another reporter, Rym Ghazal, wrote a column about it, which has prompted people to pipe up with their own stories of seeing domestic staff treated badly in and around Abu Dhabi.

The day the article ran I stopped into grab a coffee at a Starbucks in Al Wahda mall. An Emirati woman was waiting to pick up whatever she had ordered, and a tiny woman sort of lurked in the background. I motioned to her, as if she was in line. She just shook her head. As I was ordering my drink, she followed on the heels as the Emirati woman headed out into the mall.

The picture above is from a print ad that will run in some newspapers in Saudi Arabia. It's hard for me to imagine anyone abusing anyone, verbally or otherwise. But even the thought that woman would not be offered her own hot drink to enjoy breaks my heart. How do all these people living and working here, far away from their own families - often their own children - survive when they are being treated well, let alone badly?

Hopefully those ads will hit home. But it's been my experience that people who behave badly rarely recognise themselves when it is reflected back to them.
at November 23, 2008

I doubt ads will change the Arabs.