A couple of weeks ago I spent some time at Atlantis, the massive new hotel on the Palm Jumeirah in Dubai.

So I was particularly interested this morning, when I opened the first-ever Saturday edition of The National, to see a review of it in the travel section. I was even more pleased to see it was written by Rupert Wright, a business editor at the paper and one of my new favourite writers on the planet. I mean, he makes business kinda funny - not an easy feat these days.

One does not expect to laugh out loud during a hotel review, and certainly not more than once. But then again, most writers do not come up with stuff like this: "Nobu was spectacular, although my wife complained about the interior and I found the chairs unnecessarily hard" and "one day you will be able to catch the monorail from the city; now you just hear the sound of welding as you lie on your sun-lounger".

He also hated, as I do, that the hotel makes guests pay for internet access: "What will they charge for next? The air-conditioning?" and praised his male masseur, describing him as "jolly handy with his hot stones".

Here is the glass fountain in the lobby he dubs "ghastly": 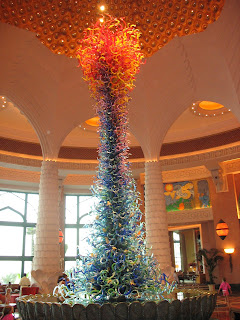