An story about some men who love their camels...maybe just a little too much 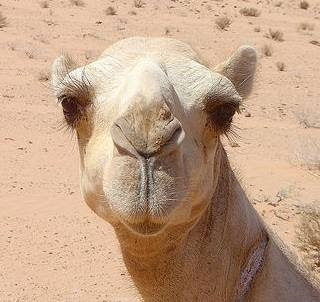 There was actually a camel festival in Abu Dhabi this month, which made me giggle. But this story was the best. My favourite quote is from the fellow who saves the freshest milk and honey for his camel. Or maybe the one who said 'don't take a picture of me, take a picture of my camel.' From The Khaleej Times.

ABU DHABI – O rider of a pure, unmixed, well-chosen mount, perfect of limb and with sires beyond count...Thus begins a Bedouin poem, believed to be written in 1971, describing a beautiful camel.

The desert animal, praised in the Holy Koran, and a fundamental part of the Bedouin poetry, has always been the centre of the Arab way of life. At the Mazayin Dhafra Camel Festival in the Western Region of Abu Dhabi, this praise is reinforced not only in poetry recited by men sipping tea and coffee in front of their tents, but also in the prizes that the winners of the camel beauty contests walk away with — four-wheel vehicles and cash of up to Dh30,000.

The first of its kind, the festival has attracted tens of thousands of camel owners from all across the Gulf region.

"The camel is always beautiful in the eyes of the Bedouin and he will never tire of showing his affection for it," said Mohammed Al Mazrouei, who has come to attend the camel festival along with his father.

"For hours, my father can go on reciting poetry on the camel, which he learnt from his father or composed himself while sitting under the stars in the desert," added Mohammed.

Mubarak Al Mazrouei, who has a camel farm not far from the competition grounds and is here to participate with a black camel of his, agrees how camels are the centres of their lives.

"We really care about the camel a lot," noted Mubarak, while quickly adding that they often give the best fresh milk and honey to the camel. "We add best quality hay and grass to the camel's diet to improve its hair, body and general outlook," he revealed.

"If you want your camel to win a beauty competition, you must feed it like this for several weeks before you take it to the show," explained Mubarak.

"Of course, it doesn't come cheap. It may boil down to nearly Dh5,000 per month on one camel," he pointed out.

Meanwhile, Mohammed Rashid Al Dosseri, whose camel is vying for the honours, shouted from across the road: "Come, come and take a picture. Not mine, my camel's! Can you see how beautiful she is?"

He and his black camel have travelled all the way from Riyadh to participate in the competition.

"Back home I have around 150 camels at my farm but this one is the most beautiful one I have," said Mohammed, while adding that if he were to sell it, he would not accept anything less than Dh100,000.
at April 28, 2008