It's a bit difficult in a sandstorm, to keep a clean car 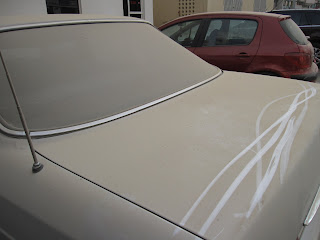 Apparently, it's very important to keep a clean car in Abu Dhabi. I understand this, as most people drive nice if not expensive or wildly expensive vehicles.

But even in Canada, with its endearing lack of blowing, settling sand, I wasn't really that good at keeping my car clean. Especially during that dirty time between winter and spring. Occasionally it would get so dirty someone would say something jokey about it, and I'd clean it.

I've been sharing a car rental with a friend this summer and it's going really well – except for the fact that I've scraped the front bumper and she's dented the back, of course. It's one of those white rentals, a Corolla, that fill the streets of Abu Dhabi. Neither of us are that good at keeping it clean, which is why I laughed when making a police report about my scrape. The officer stared at the spot, looked at me, looked at the entire car, and then said "so dirty?" His tone was a mixture of question, bafflement and disgust.

This week a cab driver told me he's known of people who were pulled over by police in Abu Dhabi for their dirty cars (and I've been told in Oman it's actually illegal to drive with a sand-covered car). My friend tells me whenever she is at Al Wahda Mall the men who operated those little portable car-cleaning carts – cool, huh? – are always offering to give ours a wash.They look very confused, she said, when she doesn't want them too.

Last week I was cat sitting an incredibly nice villa, one that has a pool and an exercise room and big flat screens: you know, how the other half lives. There is also a nice man named Murtaza, from Pakistan, who lives in a small apartment inside the villa gates and who I think is sort of a driver/caretaker. The other day he came and asked about my car. I said we could move it to the street from the driveway, if it was blocking in the Land Rover. That's not what he was asking.

He wouldn't let me take no for an answer. He seemed a little upset by the state of it. And he was clearly relieved when I finally let him give it a wash.
at August 03, 2009

I was once stopped by a cop in Dubai, for a routine license and registration check. It was 2 days after a rainstorm, and I clearly hadn't had the chance to wash my car.

As the officer was handing me back my license, he ran his finger across my hood and said "you must wash your car". I smiled, thinking he was joking. He said "no, no, you need to wash it otherwise you could get fined". The nerve!

Is it for safety purposes (distinguish cars if accident) or is just to improve appearance of the city?