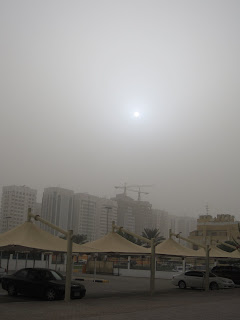 Well there was one good thing about the dust cloud (the one that's been around since last week, is forecast to return) and that is it has made me appreciate the sight of the sun.

The National has amazing aerial shots of the cloud this week, with it literally looking like a lump hovering over the little triangle that is the UAE. It really is gross and aside from attacking my eyes, left me short of breath and feeling as though I had smoked a pack of cigarettes AND an entire shisha. But from the look of pics on the wires, Saudia Arabia, and of course Baghdad, had it worst.

Several theories have now been put forward for the cloud – which left an orangey dust all over everything that scientists say may have travelled the length of the Gulf – but it seems no one really knows for sure.

The most outrageous theory, to me, is that years of military operations in Northern Iraq have stirred up the top crust of the desert and broken everything up so it's more floaty and mobile. That's not exactly how the scientists explained it, but you get the drift.

Others pointed to the ongoing drought in Iraq, made worse by the impact of damming and irrigation projects upstream in Turkey and Syria on the Tigris and Euphratest rivers.

Doctors have been telling people to stay inside as much as possible during the storms. And apparently the particles aren't small enough to cause lasting damage to the lungs – ie create the conditions for future emphysema and cancer – although it still can't be good for you.
at August 05, 2009