My new obsession is Noor, though the plot escapes me 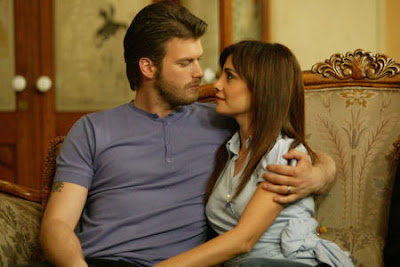 (There is a lot of this type of staring going on, only more fraught)

Noor is a Turkish soap opera - formerly called Gumus - that flopped in 2005, only to resurrected by a Syrian production company, dubbed into classical Arabic, and broadcast nightly on a Saudi Arabian satellite channel. Sex, wine with dinner, women walking about in regular clothes, a blonde, blue-eyed leading man who knows how to treat his woman, most of the time - no wonder millions in the Middle East are transfixed. Or that the Saudi grand mufti, Sheikh Abdul Aziz al Sheikh, just prohibited Muslims from watching.

He called it “replete with evil” and a “warrior against God and his Prophet”. And I've been enjoying it! Even though so far, the only Arabic word I can recognise is "later" and I find myself quite befuddled by the goings-on. If you want to find out more of my thoughts on the soap opera I love but do not understand, visit Abu Dhabi Nomads.
at July 29, 2008

Oooh, oooh! I can't take my eyes off this show when its on - and like you I can't understand a thing coming out of those beautiful people's mouths. What hooked me was the incessantly played commercials that hype this ill-fated (?) romance with a backdrop of haunting music and over dramatic intense stares from the main siren at the blue eyed boy. There's something about her, this big eyed brunette with a stare so powerful it should gore a hole in his head. My computer nerd-out time is not complete without Noor on my telly.