Abu Dhabi bars have to be experienced to be believed

Many of them are quite atrocious. Jammed with men (and ladies, ladies of the evening, you might say) And every so often when some of the bars we usually drink at close, we wind up at others we rarely drink at. Or, I should say, I rarely drink at. And that is how I found myself at a bar called Safari, in the Howard Johnson Hotel (yes, the Howard Johnson Hotel) at 2 a.m. the other night. I was with two male friends, colleagues from the paper. There is a fake tree in the middle of the bar, and lots of foliage hanging from the ceiling. 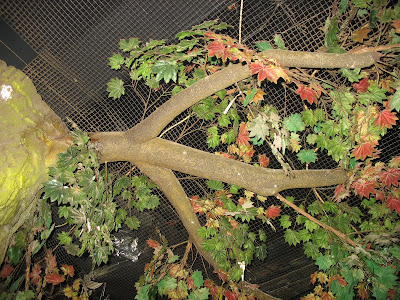 A Filipino house band plays, loud. At one point the singer launched into John Denver's Leaving on a Jet Plane and I felt like I was watching the Top 22 episode of Canadian Idol.

In keeping with the bar theme, the bar is overwhelmed by a giant mosaic featuring a large tiger. When I asked the bartender for a bottle of water, he turned around and opened the door to the bar fridge that was underneath the bar's back counter. One would expect to see a row of bottles there, but not in this bar. In this bar, it was just a space, and through it I could see another room. The bartender ducked down and scrambled through the space. He disappeared for a few seconds. Then he reappeared, with my (warm) bottle of water.

We got a pitcher of beer and sat down. It's been a long time since I've shared a pitcher with people, but I stress, this is not a bar where one drinks cocktails. Soon, a man who was trying to fish stuffed animals out of a machine beside us (you know the hanging claw thing that seems so slippery? yes, I thought it was a weird game for a bar too) started waving his cell phone very slowly in front of our table, like he's casting a spell. He was quite over-refreshed, to the point of drooling (I am not kidding about this) and we thought he might be filming us. But actually, on closer inspection, we realised he wanted us to see a video that was playing on his phone. Of a cat, feeding a litter of kittens. He really wanted us to see this video (over and over, apparently) and so he propped his phone up against my glass of beer. He left for a little while, and we were glad. Then he came back, and picked up his phone, and tried to show us the video again. Then he started touching my one friend a lot, and since the other friend was telling me an outrageous story, I stopped paying attention to the drunk man for a little while.

Then the drunk man spilled his full orange juice drink all over my friend's lap. He was very apologetic, trying to clean up my friend's lap, at which point me and the other friend began laughing hysterically, because there is nothing like a guy who has had a drink spilled on his lap not wanting any help cleaning it up from the guy who spilled it. Then my friend lost his patience, but not really. Not like I might have. He was actually quite patient, considering. It continued on like this for a long time, with the cats, and the danger of a new spill from the fresh drink he (not sure how) obtained from the bar. The drunk, drooling man also kept shouting his cell phone number into my ear, accompanied by a fine, vodka-laced saliva spray, while entirely touching me too much, until I told him to go away. It pained me to do this, as I know rejection is so much worse when someone has had too much to drink. He seemed to not notice, because before long, he was back, and repeating the number in my ear.

When we left, he was having a loud argument with a member of the bar's staff. It was all quite something.
at July 15, 2008

LOL just had to come back and post this after reading your profile in your interest section :being an ex-pat without becoming a full-time alcoholic lol just funny