Water on the bathroom floor

It might not sound like much. But most everything here is tiled, which means it is slippery without moisture. And when you add a giant puddle from goodness knows where pooling in my bathroom every day, to flip flops, you basically have a hotel room/skating rink.

I have slipped a half-dozen times because of this water leak, which I have gently and kindly inquired about having fixed at the front desk. Each time I've pulled a different muscle - happens when you get older, doesn't it? - and cursed the puddle. This week I asked again, and when I went back to find out why the water was still there, Gemma, the lovely woman who seems to reside at the front desk each day, every day, tracking my movements with precision, sighed, shrugged her shoulders and said "I think it's normal, Miss Ann."

Then, last night, as I prepared to go out to my first Abu Dhabian house party, I got a phone call. While heading for the phone, I slipped in the hall. Again, because of the freaking water. I fell down hard but the worst part is, my big toe and the toe beside it (what are those toes called again?) were propelled, at a high rate of speed, into the corner of the wall, which had been thoughfully baseboarded with a different kind of tile. The kind that had chipped away at some point to form the ragged, evil edge that tore my toes apart. They both began hemorraging immediately. Sorry, that's haemorraging, in British. I think.

Mother&*%$#@. That's what I said. My big toe, more than 24 hours later, continues to bleed. They feel like those cartoon injuries - I think the big one might actually be visibly pulsating.

This morning, I limped down and said to Gemma, 'do you see what happened to my toes?' (I had used every last Bandaid in the box wrapping them up - it looked like a child's work, I realized too late) 'Oh Miss Ann,' she said. 'I send someone to fix.' 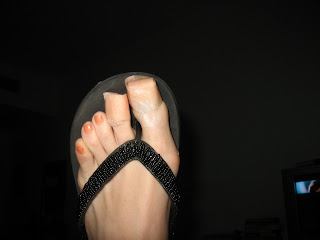 One minute later, two blue jumpsuit-clad workmen ring my doorbell. They came in and assessed the problem for about two minutes. They left and said they would be back. I swore one of them said "with a new one." A new toilet? I thought. Good.

Five minutes later, the doorbell rings again. I open the door to find the two workmen, the hotel manager, and another fellow from the front desk. They all stand there. The front desk fellow hands me two neatly folded bath mats.