I went to Ethiopia last weekend

...which is a little hard to believe right now, sitting in 44 degree heat (will I stop complaining soon? Or will I pass out on the road whilst hailing a cab? It's hard to tell which will happen first).

My best pal works in development and just happened to be on a mission to Africa over the last month. We started talking, sort of 'could we?' 'would it happen this soon' and then when we figured she was going to be in Addis Ababa over the last weekend, and I realized there is a flight that would take me there and back, and my new boss kindly approved the extra days (five weeks after starting the job, he's a gem) I booked the ticket, which had managed to double in price while all that went on.

Never mind. What an experience. One of the top reasons I took this job in Abu Dhabi was for the travel opportunities. A person in Canada cannot go to Africa or India without significant time off work and a lot of money. And the flights! Have you ever spent 24 hours changing three planes? It's inhumane. So, figuring it took three hours and 15 minutes to fly home from Ethiopia, I hope this is not my last such adventure.

Here are the snacks we got on the plane. 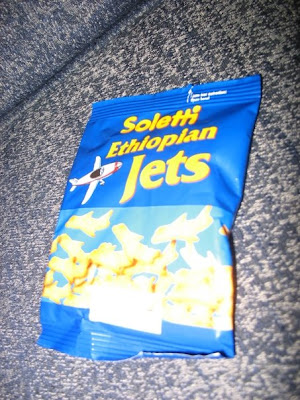 The snacks which just cracked me up so much I couldn't even eat them. Cheese planes! Are you kidding me?

I was the only white woman on the Ethiopian Airways flight there, which stopped briefly in Bahrain. The rest of the plane was full of mostly Ethiopian women. These women are a) absolutely beautiful b) prone to staring openly c) not shy about starting a conversation and d) extremely touchy.

As for the last one, I can't really describe it other than you know when you are there. The women on both sides of me had no concept of respecting the armrest. When we encountered one another in the aisles, they would just brush past but with what seemed to me to be a maximum attempt at body contact. As I waited to disembark, one woman, crowded up behind me, laid her hand on my back. For someone who has a deep respect for personal space, namely my own, it took some getting used to. But that's what travelling is all about. As for the 'not shy about starting a conversation' thing, mostly their intro would consist of "nationality?" Really cuts to the chase, huh? I had lovely chats with everyone. After the segregation that exists in Abu Dhabi (more on that later) their warmth and sense of humour was a breath of fresh air.
at May 18, 2008