I am pretty amped about the Macklemore & Ryan Lewis concert at Du Forum on Yas Island tonight. I anticipate my friend and I will be the oldest women in attendance, but you know what? We're still gonna pop some tags (not that I am really sure what that means, but I know it will be awesome).

Macklemore landed in the UAE this week for his show and has made some pretty fun posts to his 4.5 million Instagram followers, including this fun mini Abu Dhabi rap. Will we hear it at the concert, I wonder? My favourite photo is this one, captioned "the language of selfie is universal". 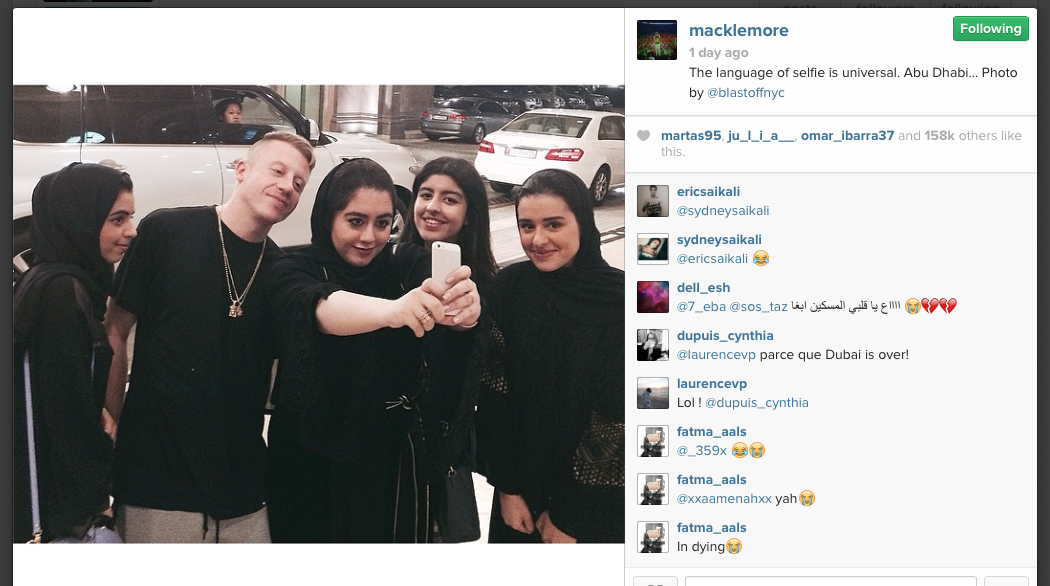 Judging from the pics shot by some of the people in his group, the trip has also involved the typical: desert safaris, a mosque the Burjs (Khalifa and Al Arab) and old Dubai, too.

A couple of other things:

• Here's a cool interview with Ryan Lewis, conducted by The National's Saeed Saeed.

•On Tuesday, Ryan Lewis, with the support of Macklemore and their whole team, launched the 30/30 Project. Lewis's mom contracted HIV giving birth to one of his siblings 30 years ago and to celebrate her survival, his family and team are trying to build medical centres to provide health care to people suffering from Hiv, Aids, tuberculosis and malaria who can't get it. They are more than halfway to their first financial goal on the crowd-funding site Indiegogo, so click here for the story and to donate. The first project is in Malawi, where more than 1 in 10 people have Aids.

•If you haven't seen Macklemore & Ryan Lewis participating in the 2014 Grammy Awards performance of One Love, please. Now. Shivers.

•That beautiful singer you heard on One Love is the Seattle-based Mary Lambert sampling her lovely tune She Keeps Me Warm. Lambert is truly awesome to follow on Instagram. Also, her first EP is called Welcome to the Age of My Body and with the video for her single Body Love she has launched a pretty cool self-love movement; I am amping up the courage to participate.

•And obviously it goes without saying that Macklemore and I go way back to February and our stay at Ananda in the Himalayas, where I gave the pop star the respect he deserves by not introducing myself at breakfast or over our yoga mats, even though I desperately, desperately wanted to.