I like to write: Did you see Argo? Want to read my interview with former Iranian ambassador Ken Taylor?

In which he talks about hanging out with Ben Affleck, his role in helping six escaped hostages get to freedom in The Canadian Caper, the tragedy in Benghazi and why Canada should have kept its embassy in Tehran open? What a guy. Anyway, it's all here. 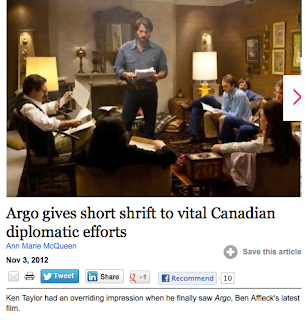 And by the way, if you haven't heard, the movie is well worth your time. Just don't look for a nuanced portrayal of Iranians at the time. (Although I liked the little history lesson at the beginning acknowledging America's oil-inspired interference with Iran's democratically elected government in the 1950s, which played a major role in the whole crappy mess.)