Welcome back! I was almost attacked and eaten by this Big Bug

Okay, that is a bit of an exaggeration, obviously. But I did find myself getting this weird "I'm not alone in here" feeling the other day in the loo, and low and behold, this GIANT Big Bug was eyeing me up from the wall to my right. If I had the nerve I would have held my iPhone up next to it and photographed it with my camera, to show you that the bug was very nearly (with antennae most definitely) as long as the iPhone. 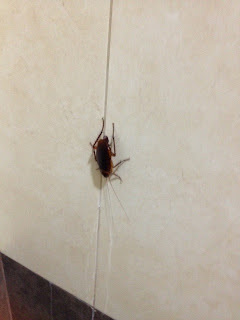 This is not my first encounter with this unsavory sort. There have been several over the last four years, all terrifying. Look, I love all creatures big and small. Except this one.

Long-time readers may recall that several years ago, I opened the door of my first apartment in Abu Dhabi one morning to this. Giant bug who called it quits (I like to imagine this part) after a long arduous journey, just as he knocked, squeaked out "help", flipped on his back and left this world forever.

Does anyone know what Big Bug is actually called, and what it's purpose in this part of the world is other than scaring me at semi-regular intervals? Any information would be most welcome.

UPDATE: Okay fine, it's a cockroach. I knew that, deep down, but I guess I was just hoping that someone would write to say "oh it's a rare Yemenese jute beetle, the sighting of which brings life-long luck and prosperity", or something like that. I would also like to stress that this sighting was in the work loo. The closest one of these big boys has been to my home was on that doorstep several years ago. And thank goodness: how would one go about killing it? It's the size of a squirrel.

Umm its a cockroach.

That my fellow Canuck is called a cockroach. They are as common as the beloved Toronto raccoon in my backyard! If you are infested then I would recommend getting a "sticky house" available in the UAE to catch them. Had horrible experiences when I lived in Saudi as there, they are tiny little guys that come in teams which made it even super worse!

If you can't get hold of a flame-thrower, then oven cleaner which contains ammonia is the best - they just up and die after being sprayed with that stuff. But you do have to be careful about the surfaces on which you spray the oven cleaner, as it tends to strip off paint and varnish if you don't wipe it off immediately!

Don't crush them with your shoe and then walk around - you risk spreading their eggs everywhere. Best disposed of in a paper towel and flushed down the nearest toilet.

All good advice, but really, if I see another one I am not attempting mini-murder without a flame thrower