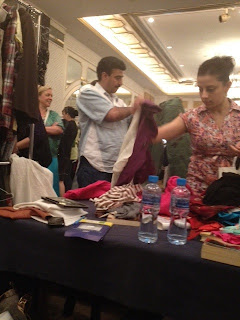 The above photograph is of strangers sifting through my belongings. It's hard to believe, but I have accumulated a lot of stuff over the last four years living in Abu Dhabi. At the same time, living in small spaces and in such close proximity to people who do so much with so little (labourers etc) I have been thinking a lot about my consumerist ways and how they have nothing to do with true happiness and becoming a lot more interested in changing them. The decision to pare right down like this, happily,  coincided with the announcement that the Sheraton Corniche would be holding its first "night" charity flea market, so a friend and I decided to split a table and get rid of our junk. (Her junk was a little bit nicer than mine; it involved Jimmy Choo shoes)
I was getting stressy though yesterday, having to leave a busy workday early to set up the table, wondering how I would lug my car full of stuff inside, pondering how I would do that and then park, thinking that the whole thing was going to end with me sweaty and cranky and regretting the whole thing, et cetera. And then I pulled up to the hotel, where I happily saw that they had provided staff with giant rolling bins dedicated to moving all the stuff to tables inside. And even better - free valet parking! It was a flea market like no other.

Instead we just chatted with various people who popped by, got offended that no one wanted to pay more than Dh10 for anything - even Jimmy Choo shoes - and laughed uproariously at some of the odder people such an event brings out. Among the highlights: a man with the worst Lego toupee in the world, an extremely thin frazzled-looking woman in a pantsuit my friend promptly dubbed "80s alcoholic" and a fellow who really put me on the spot as he questioned my decision to sell a DVD of the musical Brigadoon. (He already had a copy, you see, but was thinking of getting a second one) I only bought two small but very worth-it items. (More on that later - a very cool local crafts person)

We each left a whole lot lighter and about Dh500 richer, some of which we promptly used to quench our thirst with margeritas and fill our bellies with yummy Mexican food next door at El Sombrero. Here's the moment, about three hours in, when we decided to start giving stuff away: 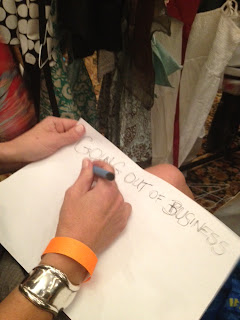 UPDATE: The next sale is Wednesday, December 12 from 6pm to midnight at Arzanah Ballroom.
Tickets are already for sale at Sheraton Corniche reception. Reserve your table via email at events@sheraton.com.
at September 20, 2012

Email ThisBlogThis!Share to TwitterShare to FacebookShare to Pinterest
Labels: Only in the UAE, valet parking

LOL what size are those jimmy choo's??!!!