Okay, so it's old news now. But I still love this shot of Snoop in his hotel room, wearing a kandoura before performing on May 6 at Yas Island, that is circulating the internet. I cannot verify its authenticity, but looks like him to me. He's also wearing slippers. Awesome. 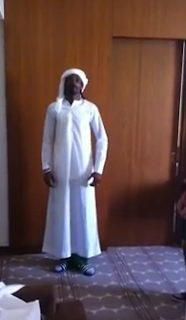 And after the jump, as promised (although I doubt anyone really wants it), the unintentionally hilarious story that grew out of my interview with Snoop Dogg in Los Angeles back in 2004 as he promoted the  epic (not really) comedy Soul Plane. The film is about a guy who comes into some money and starts his own all-black airline. There were some real up-and-comers in it, thinking about it. Mo'nique and Sofia Vergaras, for two. Snoop's done aiight too. Props to my former colleague Denis Armstrong, back in Ottawa, On., for sending it along.

My favourite quote, from the comic actor Tom Arnold, on how much more professional Snoop was to work with over other rappers.

Don't expect to see Snoop Dogg in any more supporting roles like the
dope-smoking pilot Capt. Mack he portrays in Soul Plane, because he has big
plans to become "the black Tom Cruise."
The laid-back California rapper says from now on he wants to star or
co-star in action and James Bond-style movies.
"I think Hollywood is starting to appreciate Snoop Dogg," he says. "They
put me in one scene, you got people leaving the theatre like 'Why didn't we
have more Snoop?' ... As of now I ain't trying to search for nothing. I'm
going to tell them what I'm going to do, and either they're going to give it
to me or they're not, that's what time it is."
He'd even gain weight or otherwise alter his appearance for a role, but
Snoop shoots out a "hell no" when asked if he'd cut his trademark cornrows.
WANTS TO DIRECT
The platinum-selling musician-turned-business mogul counts porn and
fashion among his side projects and says he hopes to produce and direct
films after making it as an actor.
Born Calvin Broadus in Long Beach, Calif., the 32-year-old star had his
acting debut with a small part in 1998's Half Baked, and has since appeared
in a number of feature films including Baby Boy, Training Day, Old School
and, most recently, Starsky and Hutch.
He also appears in his own MTV comedy/variety show Doggy Fizzle
Televizzle and this year had a well-received turn hosting Saturday Night
Live.
"It was range," he says of the experience, adding he was grateful to
appear as host and not just a musical guest.
Soul Plane is an urban take on the 1980 original spoof classic
Airplane! The film features an all-black airline on its inaugural flight,
complete with sexed-up flight attendants in plunging necklines, an on-board
nightclub, "low class" coach area and a cast of stereotypes.
First-time director Jessy Terrero wanted relative newcomer Kevin Hart
(a standup comic, writer and star of the quickly cancelled ABC sitcom Big
House) to play a lead character who starts his own airline after winning a
$100-million lawsuit.
Terrero had worked on several of Snoop Dogg's videos and so went after
the rapper first, later adding Wu Tang Clan's Method Man as Hart's sidekick
cousin.
Tom Arnold, who plays an unwitting father bumped on to the all-black
airline with his girlfriend and two kids, waited until Snoop and his
associated star power had signed on for the film before he agreed to do it.
PLEASANT SURPRISE
And after his experience working with DMX on both Exit Wounds and
Cradle 2 the Grave, Arnold says he was pleasantly surprised.
"People lump musicians all together and say rappers, they don't show up
and whatever and it's true sometimes ... Cause they can just come in the
studio, lay some tracks if they want, they're the star, whatever. I think
DMX thinks 'There's a movie going on, maybe I'll show up today, you know,
kick it with those guys ,' " says Arnold.
"Snoop's not like that. He knows he's got to be there and he's there.
Him and 70 other guys."
Arnold believes his work for the last three years hosting Fox Sports
Net's Best Damn Sports Show Period has helped earn him the respect of the
black community.
BIG WOMAN FACTOR
And Mo'nique, who has a hilarious turn in Soul Plane as an outrageous
security worker named Jamiqua, filled Roseanne's ex in on another reason
he's got respect there.
"The fact that my first wife is a big woman, big women of all colour
all seem to appreciate me ... It's like being in the club, you know?" he
says.
Soul Plane went through a major de-grossing rewrite before either
Arnold or Mo'nique would sign on, though it's hard to imagine jokes worse
than a scene featuring Johnny Witherspoon and a baked potato.
"I wanted to limit the number of poop jokes to the single digits," says
Arnold. "Originally there was a couple of things in the script that were too
disgusting, even for me."
Arnold, who has a bathroom scene with D.L. Hughley, says to this day
when he goes into a public washroom people yell out "How about a courtesy
flush?" though it's been seven years since Austin Powers: International Man
of Mystery.
'EMBARRASSING'
"It's embarrassing. So every time you go back in the bathroom, you want
to try something a little bit different."
Last month filmmaker Spike Lee criticized Soul Plane while addressing
an audience at Missouri University, reportedly calling it "minstrelsy" and
an "advanced state of coonery and buffoonery."
Central character Hart, who has also appeared in Scary Movie 3, wants
to remind people what Soul Plane is before they get offended at black
stereotypes including ghetto girls, fried chicken, the well-endowed black
man, and a pilot who earned his wings on a flight simulator in prison.
"It's supposed to be something that's a mockery of whatever's going on
out there, so it's really pushing the limit," he says. "You have to realize
it's a spoof, it's not meant to be tasteful, it's not meant to get a message
across."
OFFENDS EVERYONE
Mo'nique, also a stand-up comic and star of the UPN series The Parkers,
isn't the only cast member to say the film is an "equal opportunity
offender."
There's lots of post-9/11 humour -- dozens of cheap sliding locks on
the cockpit door, an ominous Middle Eastern passenger -- along with jokes
making fun of just about everyone on the planet, white, black, gay and
everything in between.
"We weren't saying a damn thing. We were just making you laugh," she
says. "Everything is not that deep and everything is not that serious."
Terrero just shakes his head, wondering how Lee could miss the point.
"There's nothing that exists in my movie that doesn't exist in
America," says Terrero.
With the exception of a tricked-out purple plane cruising through the
sky with Snoop Dogg at the controls, that is.