Saji Karunakaran: One to watch 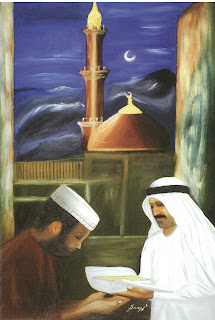 The National commissioned Mr Karunakaran to produce these Eid cards after he was profiled in the paper. Mr Karunakaran, 39, spends his day fastening equipment to oil rigs that are under construction for the Gulf Piping Company. Then at night he goes back to his camp and paints – often using only his memory and imagination as a guide.

“He is usually in his own world,” says Biju Thomas, a welder who shares a room with Mr Karunakaran. “He paints every day, and even on Fridays, and for that, there is a lot of respect for him here. Usually he is very quiet, so not many people know that he is a painter.”

It was a friend, who framed one of his paintings and took it to the company's human resources department, that got Mr Karunakaran noticed. His paints, the reporter, Suryatapa Bhattacharya, told me, are mostly those little plastic pots children use. I absolutely loved and am inspired by this man, who sees so much beauty, who has so much devotion. I hope you are too.
Eid Mubarak. 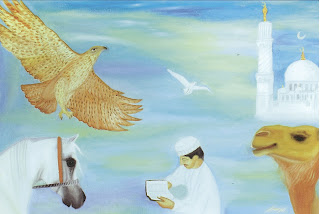