18 months later: things that no longer shock me about the UAE

1. Men making horrible sounds in their throat and then spitting.

2. Labourers catching naps on small grassy stretches at the side of busy roads. 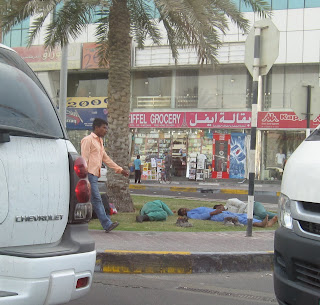 3. Children not buckled in to their parents' cars, babies on drivers' laps, or toddlers standing up and sometimes even poking their heads out the sun roof or the rear window for a peak.

4. Cats missing tails, eyes, ears paws and possessing the most horrible rasping meow you can imagine. Oh, and cats in the newsroom. Namely these two characters: Ceiling Cat (left) and Bill. 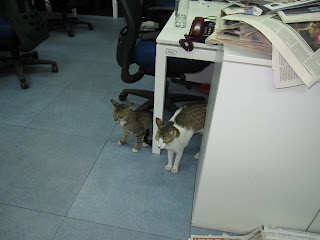 5. Cars and trucks drag racing down a main street at top speeds in the middle of the day.

6. Cars and trucks undertaking people travelling in the fast lane on the inner shoulder of major highways.

7. Children playing with things that even I, not a parent and inexperienced in the area, know aren't safe ie plastic drycleaner bags and fire composed of gas and matches.

8. Men stopping and offering me a ride while I wait for a taxi; some even circle around the block to check a second time if I am sure. (Although last night's version did raise an eyebrow: two men on a motorcycle, one mumbling "you need a ride" as I crossed in front of them at the signal. Not sure he had fully thought that one through)

9. The view, which is rarely beautiful (except in the desert) but often interesting. Take this one, from my room at the Monarch Hotel in Dubai. 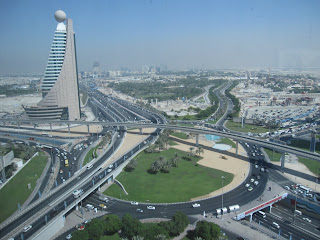 I really like this post. Though I have to admit to not seeing the cat thing before. Just lots of cats - particular in Fujeriah.

You're not making that up, are you?

We've been here 2+ years and know what you mean!

But I just can't help but LOL at this line.

What a culture shock! I don't think I could have done what you did and moved to another country that is so different from Canada.

I miss your columns in the Ottawa Citizen, they used to make my days when I'd read them. Happy to have found you back here and great job with your blog! Keep up the good work!

I was appalled at the number of bouncing, unrestrained children in the back seats of vehicles (when the windows were not tinted that is).
I noticed all of what you mentioned except for the guttural noises from the men.

@1 Lol, the spitting this is the worst of all. You'll feel sick just by hearing the sound. Dx

@10 There's no way I'd swim in my abaya, I don't want to look like a seal after playing in the water. xD Other than that, women can swim in an all women club.
I used to go there last year and it's better to swim wearing what you want instead of embarrassing myself in public.

I hate people who press UP and DOWN when calling an elevator. What the hell is wrong with you people. You retarded imbeciles. Haven't you made your mind up? Is it some sick game you play? Is it like rolling a dice? "Lets press both buttons today, I feel lucky".

Next time I'm going up in a lift and it stops half way because your sorry ass pressed up even though you want to go down and you peer in asking "going down?" Even though the indicator is telling you its going up, I'm going to say yes. and when you get into the lift, it will just be me and you, and believe me, you WILL be going down.