I am obsessed with: Microwave Man 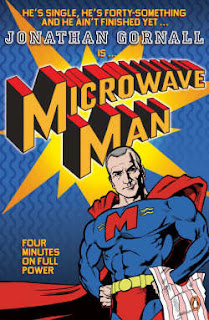 One of the very best parts of moving to Abu Dhabi, and working at this newspaper, are meeting so many different personalities from all over the world. One of my favourite is Jonathan Gornall, a former chief sub (that's a copy editor to you Canadians) at The Times and news feature editor here, not to mention part of a foursome that very nearly rowed clear across the Atlantic Ocean in 2004 save for some serious weather. That was his second attempt. Jonathan is one of the very best kind of Brits: he loves to complain, but makes it funny, he has a lightening-speed wit and loads of charisma. He is also quite dashing, and it's no secret that most of the women in the office of a variety of ages have slight crushes on him. He is also a man, and thus his ego is easily bruised. I am just guessing if he read this he would hone in on the word "slight" and walk away a little bit wounded. So, I shall change it to "major". He also has a gorgeous girlfriend, quite a few years his junior, back in England, a love of Starbucks food and a little tendency towards behind-the-wheel frustration, but then again, who wouldn't here?

I am sure he has done loads more mind-boggling things that I do not know about. But for a while, in the time between breaking up with his last serious girlfriend and meeting this one, he wrote about his adventures in the single life in a Times column called Microwave Man. Then he wrote a book based on the columns, a sort of memoir (although he refuses to reveal what is truth and what is fiction). I have been reading it for weeks now, howling out loud at some of his funnier lines, feeling a little sad at the points he is maudlin, and getting a pretty good peek into the inner workings of one (formerly) philandering male's mind. With footnotes. And ever-present libido.

Although I know quite a lot more about Jonathan (I think I do, anyway) than I'd ever bargained on, I so enjoyed his book I want to start a campaign to revive it from the bargain bins. I've done my job, ordering my oldest friend a copy from Amazon.com. Knowing Jonathan, (perhaps?) a little better now, I am sure he will not appreciate this.
at March 03, 2009