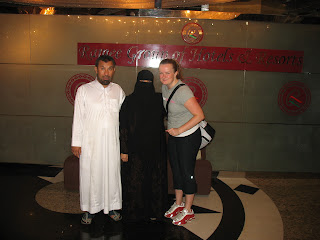 I was tired, and sweaty, and hungry. It had been a long day of work, and then I went to the gym, and then I went to feed my friend's cat, and then I spied the awesome Arabic bakery near her hotel and before I knew it I was in front waiting for a hot round of the world's best bread. Then the man in front of me spied my "Made in Canada" T-shirt.

He became extremely excited. He was visiting from Jeddah, Saudi Arabia, with his entire family.

"Can you come to my hotel?" he pleaded.

Turns out he really wanted me to meet one of his daughters, who has completed her medical school training and desperately wants to do her residency in Canada in radiology. It was one of those moments where I really, really just wanted to get home. I'd planned to call someone back in Canada and, after all, it was almost midnight. "Oh," I said, "I can't. I have to get back to my hotel."

He pleaded. And pleaded. So I relented, telling him that while I couldn't go up to his hotel room, I would wait in the lobby until he brought his daughter downstairs. I waited for quite awhile, and when they got back downstairs I felt bad (though really, what women in their right mind would head up to a strange man's hotel room, no matter how nice he seemed?) because she had to put on her burqa and if I had gone upstairs, she wouldn't have.

Now that I know how hard it can be for Arab women to study abroad – they are largely prevented from doing so by their families, for religious and cultural reasons that mean they aren't allowed to even travel alone, especially those from Saudi Arabia – I am even more impressed by her, but also her father. You have not seen a man more welcoming to a stranger, and more proud of his daughter.

We talked for awhile, me and her, and exchanged email addresses and then took this picture. As I walked away - feeling completely energised and happy, because that's what happens when you expand your world and meet new people – I was thinking about how easy it is to get in a rut, even if you've just upped sticks and moved around the globe within the last six months. And how good it feels when you fight that part of yourself that doesn't like anything different, or new, and just say 'yes'.
at September 13, 2008

And how good it feels when you fight that part of yourself that doesn't like anything different, or new, and just say 'yes'.
very true if every one of us fight that we might be one big happy pepole worldwide

Anne I think you are amazing! Kelly Taylor