Nice one: UAE domestic workers get legal protection and rights 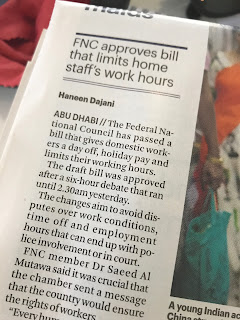 This week the Federal National Council passed a bill that gives the UAE's maids, nannies and other domestic workers a day off, holiday pay and limits the work day to 12 hours (at least 8 consecutive).

In the absence of a law governing this stuff, and having heard so many horror stories of employers of all nationalities rampantly abusing the labour and human rights of their domestic staff, this is a very good first step in protecting the rights of the most vulnerable of workers.
Look, people abuse their domestic staff the world over. I get that. People aren't very nice sometimes. But I don't really know people with domestic staff back home. I don't travel in those circles. I had a man who cleaned my apartment every month when I lived in Ottawa, and he charged me $60 and had his own business.

So I've always been amazed in the UAE when expats who have no business having a staff or a salary that would support a staff suddenly begin hiring them, ranting about them and (probably) treating them very badly.

Shortly after moving to the UAE I wrote one of my first stories for The National on something I'd noticed on the Arabic television channel, MBC, which I'd taken to watching, even though I didn't understand it. It was an advertising campaign funded out of Saudi targeting people who abuse their domestic staff. The experience was an extreme eye opener.

A year after working here a good friend decided to go back to New Zealand, and she had a shocker when she tried to find a job for her nanny (both she and her husband worked and they had two little ones) through local message boards. The women who replied, many of them who were not working, were aghast that they'd given their nanny two days off a week and paid her double what they were required. Some were even angry about it.

I don't remember if my friend ever got her nanny a job; I just remember really appreciating my friends for not being like the other people with nannies.