Human trafficking and women, and art and laughing, and hope. And one gift I'll never forget. 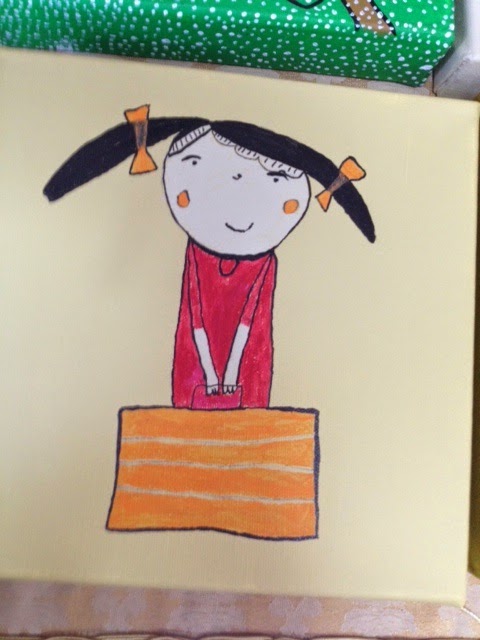 One of the ladies at Ewa'a Shelters for Victims of Human Trafficking in Abu Dhabi gave me this picture when I dropped off some copies of my story in The National about their annual art auction Silent Voices 3, which runs at The Space in twofour54 until Thursday. (Story here and picture gallery of their work here.)

I was so touched and surprised by the gesture.  Her giving me that painting is one of the loveliest things anyone has done for me. I had adored it from the moment I saw it and planned to buy it at the auction. So I bought another painting at the opening last night.
The last six weeks have been pretty crazy, mostly because I took on this project, which I had wanted to do since Ewa'a and the Abu Dhabi Music and Arts Foundation launched Silent Voices in 2012. As I journalist I always want to get it right, but with this story there are so many things that could have gone wrong. I got really emotionally involved in it - how could you not? - and so, so wanted to do the ladies at the shelter justice without being hammy about it.

I was lucky enough to spend several sessions behind the walls of the shelter, located at a villa in Abu Dhabi, as the group of women staying there created art for the centre's annual auction and exhibition. I was so nervous to do this. I have never met a victim of human trafficking. What would I say to someone who had been through something so horrific? How would I act? Would we be able to communicate? Would it be terribly, terribly sad?

And yes, it was sad. I never left a session without having a good cry in my car, because it's all just so incredibly unfair. But actually hanging with these women, listening in, watching, having their lovely, warm supervisor Yosra Kaddoura, "Mama" to them, translate for me, translate for them, talking to Jen Simon, the amazing Dubai-based artist tasked with teaching a bunch of women who've never painted produce art that people would want to bid on and buy?

That part was basically total fun. Not just because Yosra and Jen are so awesome, as is everyone I met at Ewa'a. But because the women who were sheltered there were so cool. Despite the language barrier I could tell they were hilarious, wry, sarcastic, hopeful; competitive, aspirational, honest, a bit prickly - all the things I am; all the things my friends are. I almost hate that they are called victims, because really, when you are around them, they seem like anything but.

And while I wish more than anything that they could have gone to the opening of their show, they will be able to sneak in and see it at some point this week. I wish I could have shown their faces, and their fierce spirit, and the way they bought into this project, and they way they smile, a lot, and say their names.

It's hard to describe, and I know when they leave it's going to be hard, really hard, as they move on with their lives. But I feel so confident that they are going to be okay, no matter what.

Mama Yosra explained that she tells them: "Nothing bad will happen now. All of the bad has already happened."

That is the sense that you get from those women.

All the bad has already happened.

So please go check out their paintings. Don't just shudder and ignore it and act uncomfortable when you hear the phrase "human trafficking", which is what most people do. (I know, I've been shutting down dinner parties and social functions with this stuff on a weekly basis.)

Please think about it, and look out for it, because it's happening, right here in front of our noses.

And if it makes you too sad, just remember the little girl in the first painting, with her suitcase, with her big smile on her face, heading out into freedom.
at May 12, 2014