Jay Z in Abu Dhabi: The 3 best moments of his post-Abu Dhabi Formula One show 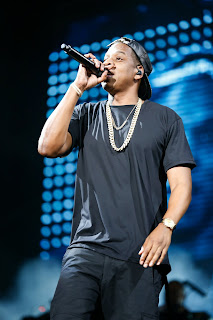 The power outage
This took me way too long to notice - after a few minutes I actually said to my friends 'he's taking a really long break' only to be told they blew a generator - but who doesn't like being part of something so large and unusual? And then Timbaland shouted out to the crowd

Thousands of blue wristbands flying through the air during Empire State of mind
I imagine the novelty of these du-sponsored wristbands, which light up simultaneously at key concert moments, ie "In Neeeeeeew York", will wear thin by the end of this weekend. But they really created a moment (and in a different way for my friend Julie, who was in the toilet when hers started flashing).

Jay Z turning the cameras on the crowd
I can't believe no other singers have tried this: it's a great time killer and an absolute delight for those in the crowd to be recognised on the big screen. He called out lots of fans, including one with a sign that read "Blue Ivy is the cutest" and another, asking "you hurt your foot?" And it was fun to hear him gently directing the camera man: "Y'all cut away too fast; you need to hold it a bit longer!"