How I experienced unexpected culture shock, and almost mingled with Lady Gaga, at a London hot yoga studio 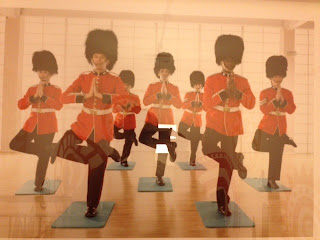 I miss hot yoga. You might laugh at me saying that, in this heat, in Abu Dhabi, but there is nothing like stretching and sweating a lot for 90 minutes to clear out the cobwebs. And that is how I came to enter London's Sohot Bikram Yoga studios the other day, when I was in town for a wedding, some sightseeing and, funny enough, a respite from the UAE summer.

I should explain that for the most part yoga in Abu Dhabi, unlike back home in Ottawa, has been largely a female experience, as many Muslim women are less comfortable in the company of men not in the family in a variety of circumstances. Although both the Body Tree and the Abu Dhabi Country Club launched men--only classes last September, and there are a growing number of mixed options out there, in Abu Dhabi my experience has been a lot of classes for women, taught by women. At least the ones I am able to attend.

Anyway, after four years of all these women, you can imagine my surprise upon entering Sohot to find the male instructor Alex standing at the front desk helping process cards, clad only in his Speedos.

The Speedos never really stopped being surprising, I must confess.  (For the Canadians out there, I use the British plural, because after all I am referring to a British person and I was in Britain. Also, in my opinion, it is twice as funny.) I have only seen two other men wearing Speedos during yoga. Speedos in Canada, I would venture, are generally not considered to be appropriate bikram wear. I am, however, open to all arguments to the contrary in the comments section.

The "mixed loos" also took some getting used to – men and women, in the same bathroom? Is this Ally McBeal? - as was, most definitely, the communal shower. Even the changing room itself seemed avante-garde to me. Due to the prevailing sense of modesty, most gym changing rooms in the UAE have additional private rooms for changing in. I've always found the changing room-within-the-changing room concept hilarious; as I changed before and after my Sohot class I found that I have actually grown to like it, and that without it, I felt quite exposed. Exposed does not even begin to describe how I felt during the communal shower experience.

Did I enjoy the class? Not really. Turns out one shouldn't do bikram yoga just two hours after enjoying a full English breakfast. Did I enjoy the experience? Very much. And the studio I went to, the Victoria one, was a really top-notch - if footloose and fancy-free - operation.

There were several other pluses: the hilarious Policy&Etiquette list, which you just know was drawn up due to people actually doing the things they say are not allowed (I have included the best ones below) and is all the more amusing to me because it would be so inconceivable to put these things on a similar list in the UAE. I loved the amazing photo of British Royal Guards in uniform, above. And Lady Gaga's blessing, below.


• No whining or complaining.

• Come to class with clean feet and body.   If you need to, please shower before class.

• Giving yourself an impromptu pedicure in class is frowned upon not to mention disgusting.

• Please wear appropriate clothing that fits you, (this means no thongs!) to ensure that your dignity is preserved at all times.

• Practice stillness in between postures focusing on your breath with no fidgeting, wiping sweat, burping or other bodily movements.

• Shaving in the showers is unacceptable!

• Leave your ego with your shoes, outside the room. 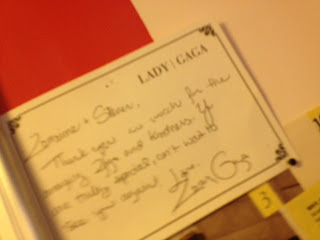 As a guy I like to wear a "speedo" style brief to Bikram Yoga. I liken it to a woman's sports bra -- it lifts and supports, does not get in the way, and does not hold persperation. I wish it was more socially acceptable for men to wear "speedos;" there seems to be a double standard or an aversion to the male form because it is mostly socially acceptable for women to wear form fitting clothing. I appreciate you sharing your experience.