Abu Dhabi Police started doing this a few months ago, sending out these amazing illustrations to accompany their press releases. The first one I saw accompanied a release about a group of kids involved in some sort of war games activity who were busted by actual cops. I thought that could not be topped, but then came this beauty to accompany Ola Salem's Sheep jumps from five-story building after failed slaughter attempt in The National: 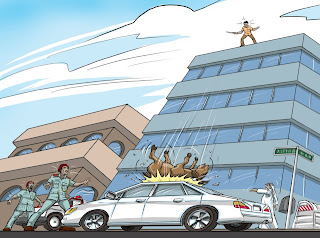 In addition to taking some license with the visual depiction of the incident, police also seem to infer quite a bit by the sheep's actions, concluding the animal preferred to die by falling than at the hands of an inexperienced butcher. Or, you know, maybe it just wanted to live. Whatever. But the carnage did not stop there:

"The [butcher] completed slaughtering of the sheep on top of the car," the police statement said. "The sheep jumping on the car did not stop the butcher from finishing the slaughter."

There are two people being held in connection to this incident, which actually happened near my house: the butcher and the person who bought the sheep. Apparently the purchase was legal, the butcher he hired was not.
at October 09, 2011