"Shall I play a song?" Hey Rob Evans - I didn't say good-bye, and I still can't quite 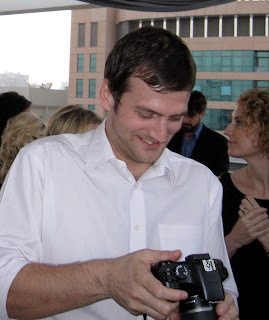 This has been a very tough week for a lot of people. Rob Evans, an assistant photo editor at The National, 37 and a dad to a nine-year-old boy, died suddenly early Saturday morning. I still can't believe it, keep checking Facebook, reading the obituary in the paper, looking at pictures, trying to have it sink in. Gerry Doyle, a senior editor at The National, wrote this fitting tribute yesterday.

Rob was a pure delight who I have known from the earliest days of this paper, who has given me more laughs and more to think about than most people I've known. He was one of those who, even when he was annoying you, left you feeling better and lighter. He had a wicked laugh, an ever-present smile, a tremendous sense of fun and enthusiasm for life that you couldn't help but catch just by being around him. During a short car ride on Thursday night, so temporary all I could think about was when we'd be out of the car and into the pub, Rob piped up from the back seat to say "Shall I play a song?" Three minutes really wasn't an interval for him; for a music lover and afficianado, for someone who was really good at being in that elusive "present" we all strive for, it was an opportunity for a moment.

He was always dropping mini-bombs about all the different things he'd done in his life. I remember riding in the back of a taxi when he casually mentioned he'd been a pilot; another time he floored me by mentioning he'd driven a taxi himself for a spell. There was a record deal... It never ended, just like the number of times he could tell his stories. Except now it has.

Personally, I am so grateful I went out Thursday night, because in the end I spent almost the entire time I was there talking with him, catching up. He gave me advice on meeting my boyfriend's daughter - "She's already got a mum and dad. All you need to do is be fun," he said, then making me laugh with: "Of course if she's going to hurt herself, you need to step in" - and we chatted about loads of other things, too. I don't think I said more than "see ya", if that. We are so on top of each other here in Abu Dhabi, it seems like you never really need to.

My heart goes out to his boy, to his dad and step-mum, brothers, other family, his girlfriend and all his friends back in London.
at November 17, 2010

I am sad that I never made the effort to get to know him. From what I have read after his passing, he seemed to have been an amazing guy. So tragic that he was taken at such a young age.

My heart goes out to his family and friends and all at The National who knew Rob well.