Only if you are going my way, lady 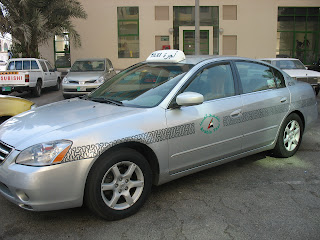 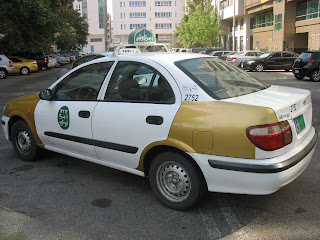 The taxi situation in Abu Dhabi is much, much improved from when I arrived almost two years ago. I rarely have to wait for a taxi for longer than five minutes, and when they stop, there is no longer a lot of arguing about the destination or a bunch of whining about it on the way there, or an attempt to squeeze me for twice or three times the fare.

This is mostly because of a Municipal plan to replace the aging little Toyotas, with their gold and white exteriors and hand-painted green signs in Arabic on the doors, with shiny silver taxis. I had a kind of romantic view of the old taxis when I first arrived, mostly because a lot of them were decorated with fancy tassles and sequins and their drivers wore variations on the Shalwar Qameez (Pakistani men wear these, they look sort of like pyjamas) and were from places so foreign to me - Yemen and Afghanistan a lot of the time.

It quickly wore off, though. I mean how many times can you be boiling in the hot sun, empty taxi after empty taxi passing you by? And when they do stop, the driver refuses to let you in as he is "going to Musaffah".

These days those taxis are so few and far between they look like total relics. Yet their drivers - the ones I encounter, anyway - continue to act like they are the only game in town. I was stuck off Hamdan street in an awkward spot on Airport Road Wednesday night. After failing to get a silver taxi, one of the old ones stopped. Guess what? He was only going to Musaffah, demanded 20 dirhams for a 5 dirham trip to dart out of his way, and complained about the traffic the entire time he did.
at March 05, 2010

I'm 2 weeks into a 6 month stint in AD and have been fortunate enough to always find one of the 'new' taxis...although it may be inevitable that at some point I have to wrestle with the older ones as you describe!