She will not be wearing "a woolen sweater and comfortable pair of jeans", I'm sure 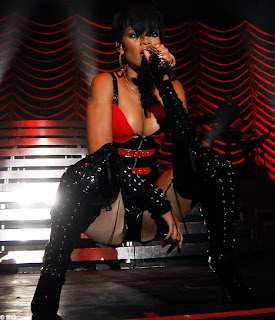 Just read claims over at Oh No They Didn't (which seems to be based on a Daily Mirror story published on Sunday) that Rihanna has been told to cover up for her New Year's Eve gig at Emirates Palace.

"And, as she's said to be making $500,000 for her performance, she's likely to do exactly what she's told," reports the blog, "which means the white slashed latex body suit she wore at the American Music Awards [not to mention her collection of eye-popping bras] will be mothballed."

First of all, as it is a one-night gig, Rihanna's "collection of eye-popping bras" hardly has to be "mothballed" (does anything these days?) unless she's planning on moving to the Middle East permanently. Even then, like many of the ladies here, including those who cover to varying degrees, the number of shops selling sexy, lacy lingerie indicate she could continue to wear them, albeit privately. Also, in late December, while Abu Dhabi is not "sweltering", it's hardly cold enough for a pop star to be comfortable performing a lively show wearing wool, as the authors suggest.

More importantly, as the lone photo I lazily took of the video screen during Beyonce's fantastic concert on Yas Island at the F1 last month reveals, when it comes to live performances by pop superstars, "eye-popping bras" seem not that much of a deal-breaker, or even an issue at all, here in Abu Dhabi. 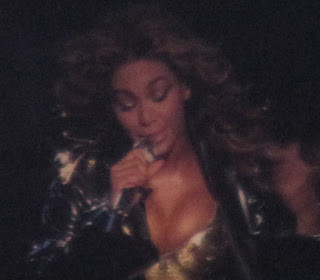 The longer I live here, the more I get tired of these types of stories sprouting from the West. Although, and this is a nod to the value of perspective, when I used to live in Canada I found them interesting and entirely believable. One can almost expect an "(insert sexy celeb here) told to cover up or tone it down" piece in the run up to a major concert or appearance in the UAE (and Malaysia, and Yemen and Saudi - actually, scratch those last two).

Of course Rihanna could come out on stage in some sort of overly conservative adopted ethnic garb Friday night, a la Paris Hilton in Dubai, and then both she and I can seem ridiculous. 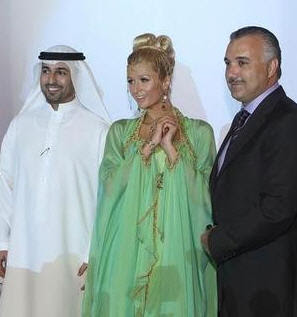 TUESDAY UPDATE: Gulf News is reporting Rihanna has not been asked to change her wardrobe for Thursday night's show.
at December 28, 2009

Very well said... The most to-the-point argument against writing about Abu Dhabi or Dubai for those back home...

I wish more journalists could see this.

can someone send this neo-fascist gits a the western tabloids these pieces. i am so effing tired of whitey always claiming the upper hand from food to knickers!!!