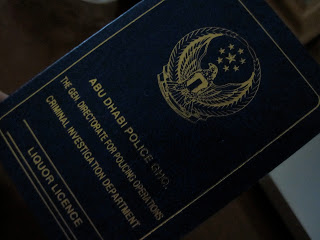 Actually it was all the news stories where Westerners get into a variety of only-in-the-UAE scrapes – forgetting where they are and giving their significant other a kiss, go for a post-brunch cuddle on the beach, arrested after an altercation with a taxi driver, charged with having sex outside of marriage after reporting that you've been raped – and the fact that they were drinking illegally seemed to become the issue that prompted me to go through the hassle and expense of getting one. It's not because the booze stores ask for it. They don't, unless it's sometime in November. Then there is this, a pre-New Year's Eve examination in today's The National of how random and confusing this country's liquor laws really are.

So you shell out $700 for a night at the Burj al Arab and understandably because it's just so darn exciting to be on vacation in Dubai, get a little giddy on champagne in the Skyview Bar before heading out to see the Burj Khalifa. Then you step outside the building, something weird happens and voila, you are being held in a jail cell, having prompted a minor international incident, wondering why you didn't just go to Majorca.

Just be careful, is all. It all boils down to a simple fact that is easy to forget, even as we are reminded five times a day by the sound of the call to prayer: this is a Muslim country, and we are just guests.
at December 26, 2010