Dear Aramex, the tremendous love I once felt for you and your US mailbox/courier service has most definitely waned

This is what almost 12kgs of magazines look like: 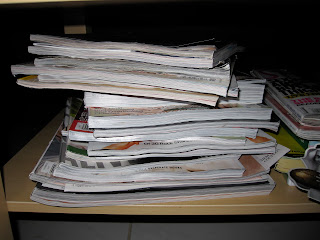 I have never trusted that mail or packages will arrive to me here in Abu Dhabi via regular routes since the birthday-packages debacle of 2008 and 2009.


And so I signed up for an Aramex account, and have been happily receiving issues of the American magazines I love every few weeks ever since. It's not cheap, but I reckon it's cheaper than buying the same issues here, as magazines can cost 15 or 20 dollars Canadian. The service has, up until this summer, been brilliant. Completely reliable – and collecting my packages had always been a joy, as I made friends with The World's Best Employee, Tariq. Tariq slid across the floor to move just a little bit faster and kept everything humming. He was cheerful and lovely and competent. I liked him so much that I took my father in to meet him when he visited in 2009.

I also enjoyed making fun of Aramex's marketing campaign, which seems to rely on solely on signs assuring their customers that "we read the Economist". But hey, it seemed to be working for them. 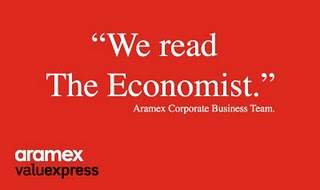 No longer (although the signs are still there in the Muroor Rd office). Things have definitely gone downhill. First off, Tariq resigned in what I can only call a huff (and probably a deserved one), prompting a series of frantic phone calls and pleas that I help him secure employment at Abu Dhabi Media Company. I tried, I did, but it just did not transpire. I began to worry, as he drew closer to his last day on the job. A man with a wife, son and mother to support cannot afford a cancelled work visa and no landing pad, not in the UAE. Luckily we spoke and he managed to get what I perceive to be a better job. He seemed pleased.

It was around that time though, that I began to realise I had not received a package from Aramex in weeks. August turned to September, then October. I phoned, asking. I emailed. Nothing on the way, they said. I checked with the magazine circulation departments, no, no they'd all been sent. In August I even went a bit wacky and ordered more magazines. They failed to arrive as well. And no Tariq to sort things out.

Well, mystery solved. Last week, two shipments, almost 12 kgs in total. When I opened the packages after a too-long wait (no one is sliding on the floors there now) and complained that inside were magazines four months old, I got blank, unconcerned stares and a vague suggestion to come back during business hours. Not knowing what else to do, I paid what I can only call an astonishing bill, and left.

My name is Fadi Ghandou, I am the CEO of the Aramex. I am taking personal interest in your story. There is no reason what so ever for the delays. Someone from aramex will be in touch right after the weekend to see how we can make sure that you are getting the service you expect and deserve. Thank you for your post
Fadi Ghandour
Fadi.Ghandour@gmail.com

My name is Fadi Ghandou, I am the CEO of the Aramex. I am taking personal interest in your story. There is no reason what so ever for the delays. Someone from aramex will be in touch right after the weekend to see how we can make sure that you are getting the service you expect and deserve. Thank you for your post
Fadi Ghandour
Fadi.Ghandour@gmail.com